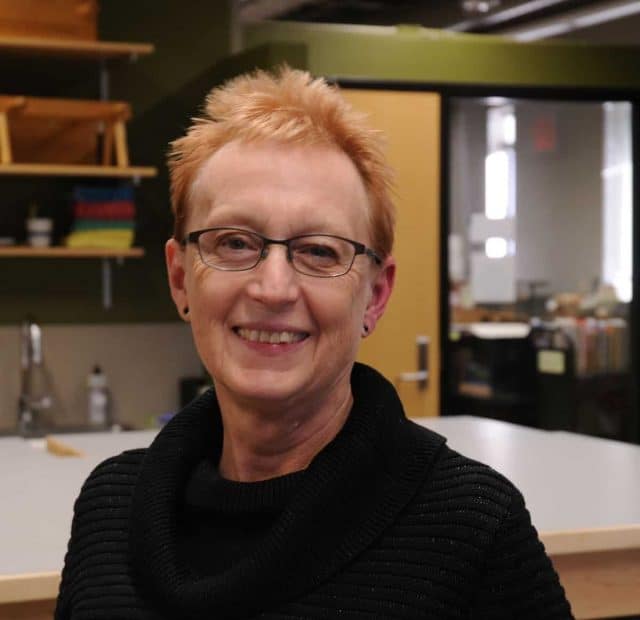 Nancy E. Kraft, Head of Preservation & Conservation, has retired after serving 18 years at the University of Iowa Libraries. Her career has been fruitful, and she plans to stay involved in preservation efforts on a local state level. Nancy has served as a board member for the US Committee of the Blue Shield since 2013, and a member of the International Organization for Standardization (ISO) since 2015. In 2018, she was awarded the Paul Banks and Carolyn Harris Award for excellence in Library Preservation.

Prior to coming to the University of Iowa, Nancy had several different positions that built up her understanding of how a library functions.

“I had a preservation background that made me a good fit here and helped me come up to speed fairly quickly because I had dealt with a disaster within the State Historical Society, so I had real life experience with that. When I first became a librarian, I thought I wanted to be a rare book cataloger so I was a cataloger for a couple years, which I think is really helpful to understand if you’re in preservation.”

Her experience with disaster emergencies proved to be incredibly helpful during the local 2008 floods. Nancy worked to preserve materials in both Cedar Rapids and Iowa City and described the experience as one she’ll never forget. She recalled the way the community came together in Cedar Rapids.

“We weren’t expecting these 200 volunteers to come and help us move stuff out of the basement. No amount of training prepares you for dealing with that… People for years after were still talking about it.” She remembered the jarring visual after the water rose. “We were one of the first ones led into the area and it looked like a war zone. I don’t know how you even get your brains and emotions around that; it was very intense.”

Nancy commented that she felt her biggest contribution during the process was being on site quickly to advise about what could be salvaged; this led to another contribution.

“[Getting there right away] was major and that was the reason that I recommended to the Iowa Preservation and Conservation Consortium that we establish a formalized trained Iowa response group. I realized that if we get there right away we can really make an impact.”

As part of her work with the ISO, she traveled to Berlin early this year to head the U.S. delegation in developing the international standard for emergency preparedness and response.

“I had been the American Libraries Association representative for the US for the National Information Standards Organization that works into the ISO. And I had been on that for four years. When the call came out for volunteers to work on international standards for a disaster response document, I volunteered and was selected… It was really interesting to get to see how different countries are organized to respond to disasters. It was a really good learning experience.”

While her career has involved many large-scale projects, Nancy noted that what she’ll miss the most about the day-to-day of her job is the people. People are what she’s always been passionate about.

“I feel that I really built up a nice conservation lab and we’ve got a nice digitization workflow going. But none of that could happen without staff. So I really like finding ways that staff can be successful and “own” a piece of the department…I’ve always tried to do that. The people make the day-to-day. That’s what made it hard to retire; I can’t take them with me.” [/ezcol_2third][ezcol_1third_end]