Proceeds from the Conservation Lab’s 30th Anniversary Auction will benefit the William Anthony Conservation Fund. To find out more about the auction, click here.

William (Bill) Anthony was born November 9, 1926, in Waterford, Ireland, and began his apprenticeship in bookbinding at the age of 16, later working as a journeyman in Ireland and England. In 1965 Bill came to Chicago to work as a fine binder at the Cuneo Press, where he rose to the position of art director.  In 1973, he formed a partnership with Elizabeth Kner and, on her retirement in 1982, continued the business as Anthony & Associates, Bookbinders. While conservation was the mainstay of his business, Bill also worked on edition and fine bindings, and taught apprentices and private students.

In 1984, Bill came to The University of Iowa as the first University Conservator.  He established the Conservation Department in the University’s Main Library, where he and his apprentices worked on rare books from the University collections, including the Nuremburg Chronicle (1493) and Vesalius’ De humani corporis fabrica (1555).  He also executed fine bindings, most of which are in Special Collections at the UI Main Library.

In the Conservation Department at Iowa, Bill continued to train apprentices and interns, and offered classes to the University community.  A former apprentice from the Chicago days, David Brock, said of Bill that he “molded me gently into a craftsman.”  All those who studied with him – apprentices, interns, students, and casual visitors – could say something similar.  Bill did not like to criticize but he had an idea of excellence and he wanted to move others in that direction.  The esteem in which he was held by his professional colleagues led to his chairing the Standards Committee of the Guild of Bookworkers from 1984 to 1988. Bill’s notable achievements at Iowa include starting the University of Iowa Bookbinding Models Collection and conserving the original constitution of the state of Iowa, which he completed shortly before his death in February 1989.

The  William Anthony Conservation Fund was established through the generous support of Julie Scott and Jim Fluck, to honor the legacy of Bill Anthony. Since its inception, the Fund has supported a variety of departmental activities, including conservation treatment, equipment purchases, and bringing visiting lecturers to Iowa City.  Some highlights are listed below. 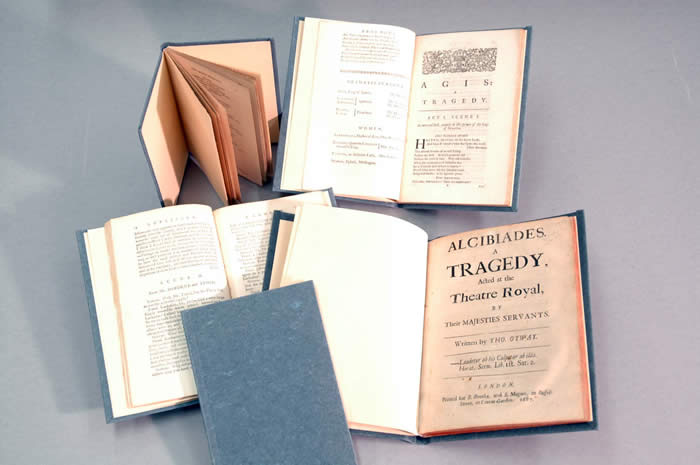 The treatment included a collation check, surface cleaning, disassembly of gatherings, optional water washing, mending, endpaper production and re-sewing. The covers for the pamphlets used hand made cover paper stock produced here at the University of Iowa. This distinctive paper was especially created to simulate the stocks used for historical paper case work as it provides the type of excellent handling, toughness and color qualities which are so complimentary to such 18th century text papers.

She has presented many lectures on historical book structures and created workshops on long and link stitch sewing; girdle books; a multi-quire, wooden-boarded codex from Egypt and most recently a model of a 17th c. printed Almanac for tradesmen with erasable pages.  Pamela is also a retired Paper and Book Intensive Co-director where she has taught many classes.

To give to the William Anthony Conservation Fund, please visit www.givetoiowa.org/libraries