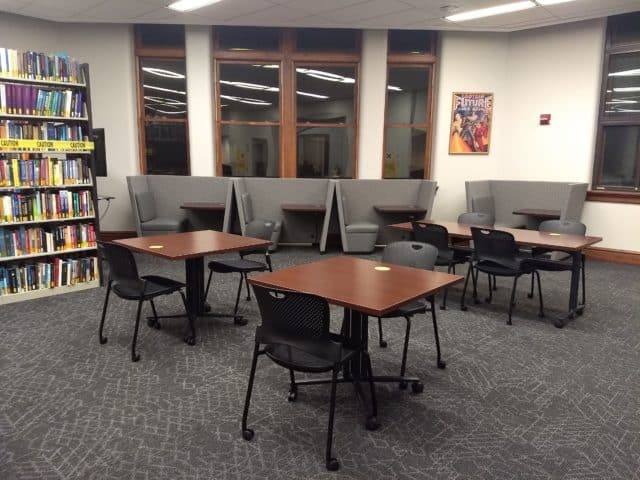 Head to the Sciences Library for a comfortable, quiet place to study! We offer a variety of study spots. There are many computer stations, study carrels and booths with USB and outlets for phones and computers, tables, and large mobile monitors to use for sharing your computer screen. This year we have new paint, new carpeting, and new rolling white boards!

The Sciences Library is located between Phillips Hall and the Biology Building on Iowa Ave. The building is open Monday through Friday from 8:30 AM to 6 PM.  During the pandemic we have hygiene stations available with disinfectant wipes and hand sanitizer. A face covering is required, and yellow stickers mark off seats that are to remain unoccupied. The book stacks are closed so that we can offer more electronic book access. If you would like to pick up a book, go to the service desk on the first floor.

Our live chat service is available during the day and also from 6-9 PM on Monday through Thursday, and 1-5 PM on Sunday.

Hope to see you soon! 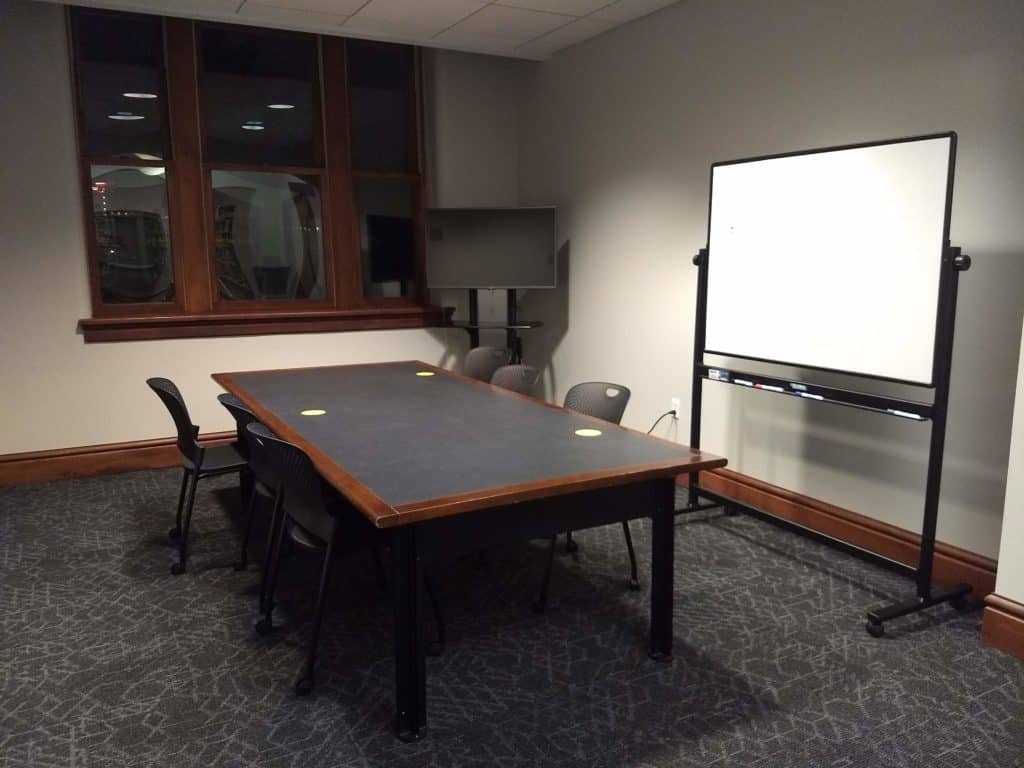 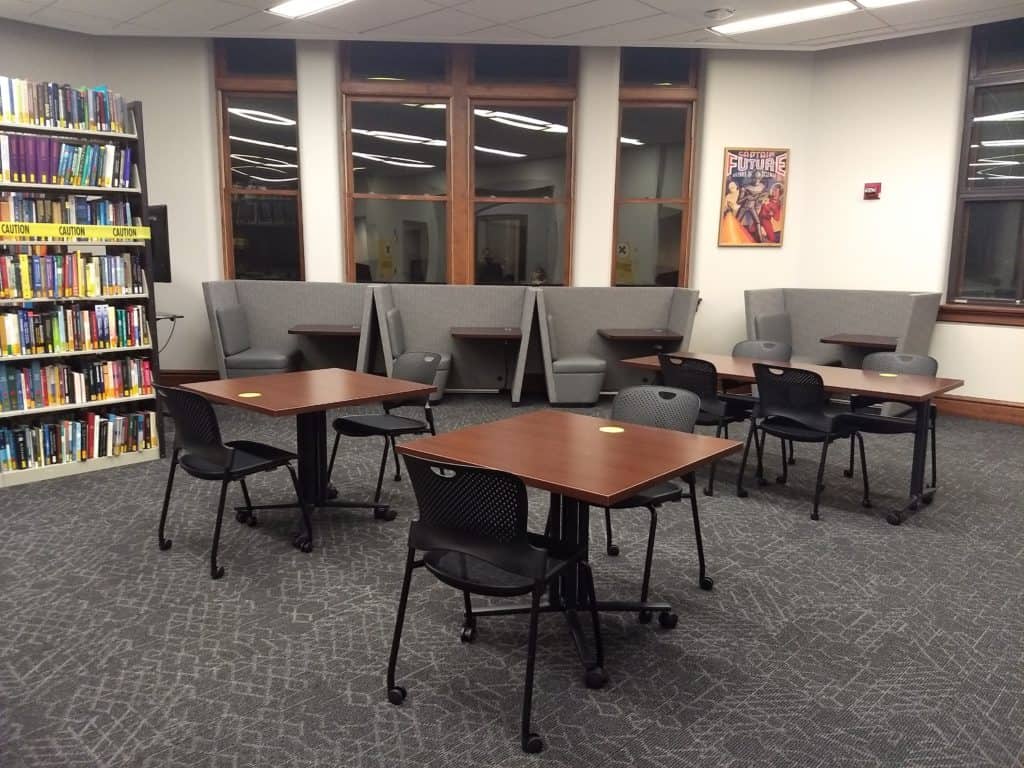 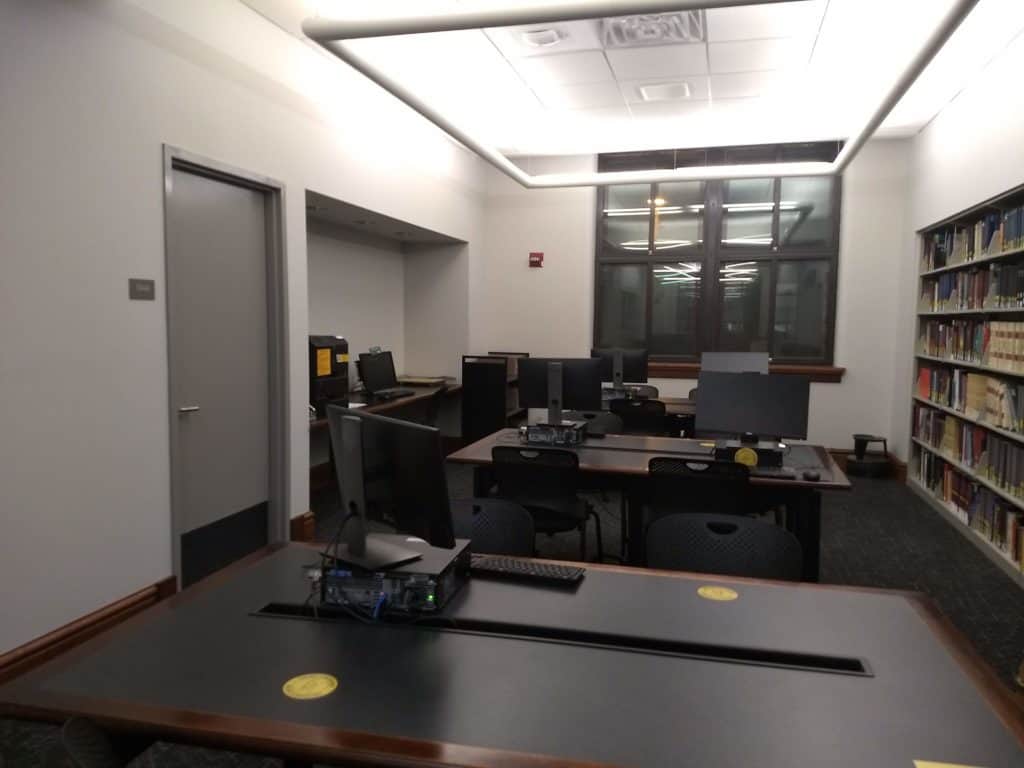 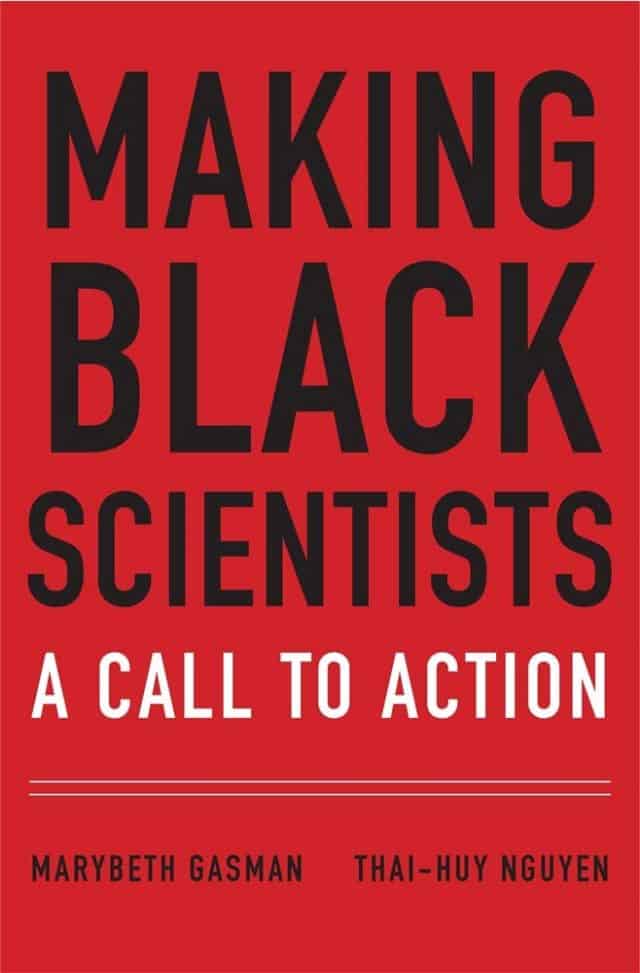 After #ShutDownAcademia, #ShutDownSTEM, and #Strike4BlackLives on Wednesday, June 10, 2020, there is a need to continue education and action about anti-racism. The CEO of American Association for the Advancement of Science, publisher of the journal Science, said that “When we hold up a mirror to the scientific enterprise, we see that it’s not only politicians and law enforcement that need to be reminded that Black lives matter.” A forthcoming special issue of Nature will be dedicated to exploring systemic racism in research, research policy and publishing in support of the Black lives matter movement. The sciences have not been impervious to racism, and there are resources for anti-racism education specifically for the sciences that will help all of us to create a better and more just world. 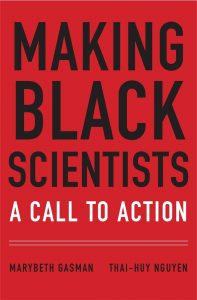 This past year Iowa City Darwin Day recorded two workshops about teaching biology without racial prejudice that have been recorded and are freely available for streaming online. The workshops are “Playing With Fire? How We Perpetuate Biological Beliefs About Race in the Classroom and How We Can Avoid It” and “Genomics Literacy Matters: Teaching Genomics to Prevent Racial Prejudice.” Additionally, there is an article in the New York Times about the curriculum taught by the workshop leaders called “Can Biology Class Reduce Racism?” which explains the necessity for classroom education that racial differences in achievement and other disparities are not due to genetics.

In the ebook Making Black Scientists: A Call to Action, Marybeth Gasman and Thai-Huy Nguyen offer ideas to help support and advance future black scientists based on their observations of successful outcomes at historically black colleges and universities. In Sisters in Science: Conversations with Black Women Scientists about Race, Gender, and Their Passion for Science and Notable Black American Scientists, learn the about stories of black scientists to amplify their voices and to inspire those who will follow in their footsteps. To find more in InfoHawk+, search on keywords such as Black scientists, African American scientists, minorities in science, or ask a librarian for assistance (lib-sciences@uiowa.edu).

The UI Libraries Antiracism guide provides information about understanding racism, resources for antiracist allies, support resources for people of color, and resources for parents and educators. This guide and the resources within it are meant to inspire reflection, education, and action for the University of Iowa community and beyond. 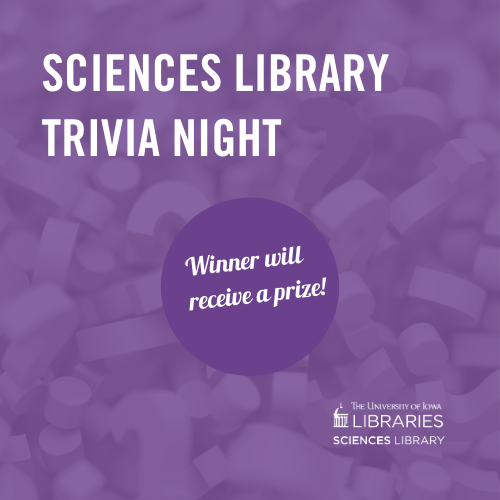 All are welcome to join the Sciences Library for Trivia Night at 5 PM central on Fridays through July 10th! We will use Zoom and Kahoot, so join Zoom on your computer to see the trivia questions and use the browser on your smartphone to input your answers. We will do two rounds of questions and give away two prizes per evening. All are eligible to win the prize and the winning person in each round will receive a prize in the mail! Winner must provide name and mailing address to receive the prize. Register at https://uiowa.libwizard.com/f/uiscilibtrivia to receive the Zoom link. The Zoom link will be the same from week to week, so you only need to register one time. This is a free event and open to the public.

There will be two rounds of trivia each evening. The first round of trivia will be general questions. The second round will have a theme: animals on June 12, myths on June 19, movies on June 26, food on July 3, and fantasy on July 10. 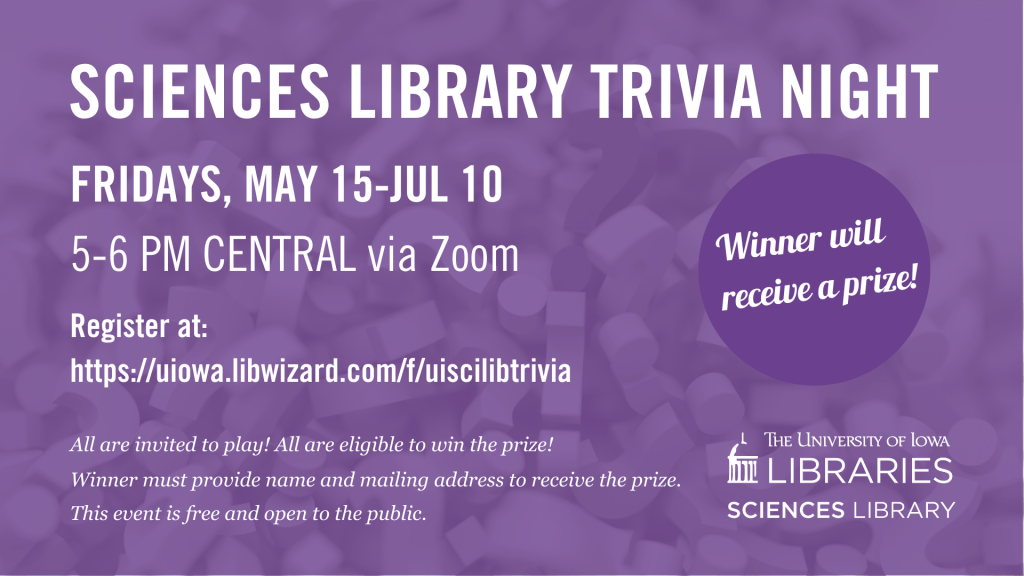 Hawkeyes, join the Sciences Library for Trivia Night on Fridays, April 24th to July 10th at 5 PM! The trivia will be led by student emcees Madison and Mason. The questions will be from various subjects such as science, arts & literature, history, pop culture, and sports. We will use Zoom and Kahoot, so join Zoom on your computer to see the trivia questions and use the browser on your smartphone to input your answers. We will do two rounds of questions and give away two vacuum insulated, stainless steel water bottles per evening! The winning Hawkeye student in each round will receive a water bottle in the mail! Register at https://uiowa.libwizard.com/f/trivia to receive the Zoom link. The Zoom link will be the same from week to week, so you only need to register one time. This is a free event. 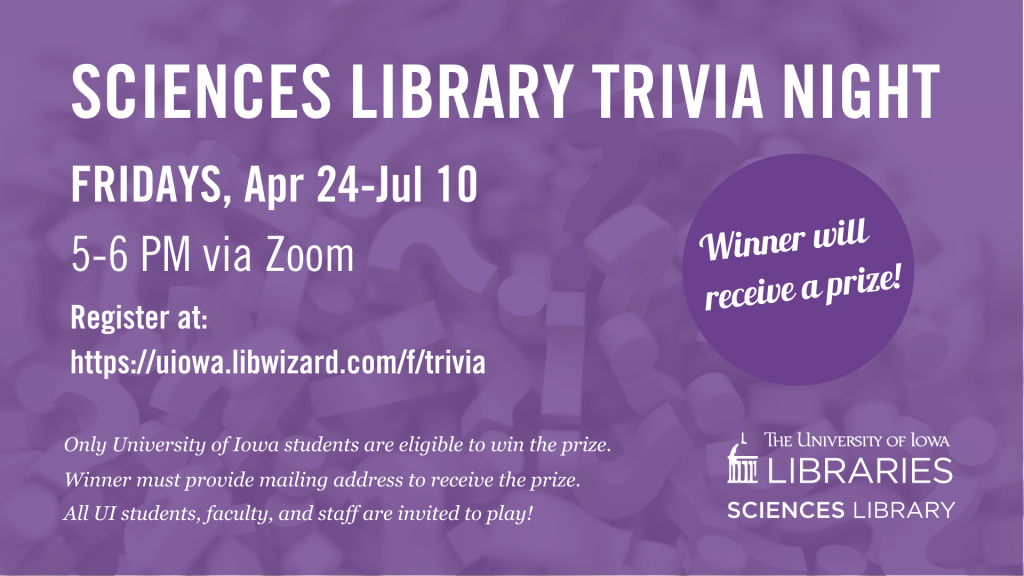 Hawkeyes, join the Sciences Library for Trivia Night on Friday, April 17 at 5 PM! The trivia will be led by student emcees Madison and Mason. The categories will be science, arts & literature, history, pop culture, and sports. We will use Zoom and Kahoot, so join Zoom on your computer to see the trivia questions and use the browser on your smartphone to input your answers. The winning Hawkeye student will receive a vacuum insulated, stainless steel water bottle in the mail! Register at https://uiowa.libwizard.com/f/trivia to receive the Zoom link. This is a free event. 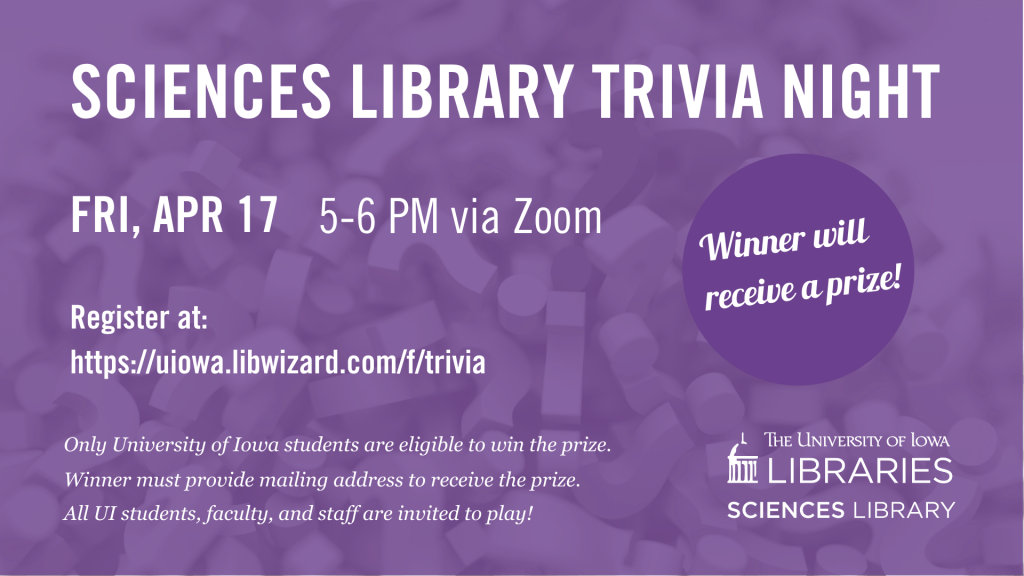 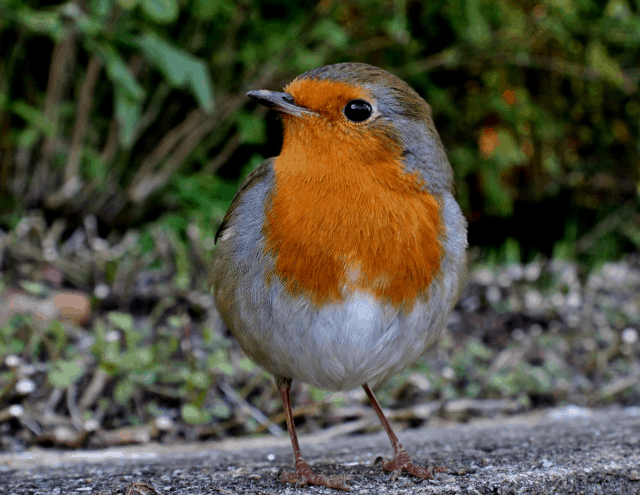 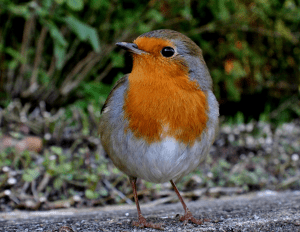 It’s National Poetry Month, so if you would like to explore poetry about science and take a break from the uncertainty of life living through COVID-19, then you have come to the right place. All of the poetry listed below relates to science, including biology, chemistry, earth & environmental sciences, mathematics, and physics and astronomy. If you know of science poems that we could add to our list, you are welcome to email your suggestions to lib-sciences@uiowa.edu.

If you need help accessing these books or finding other items in the UI Libraries collection, email us (lib-sciences@uiowa.edu) any time, or live chat (www.lib.uiowa.edu/sciences/contact/) with us Monday to Friday, 8:30 AM to 5 PM. 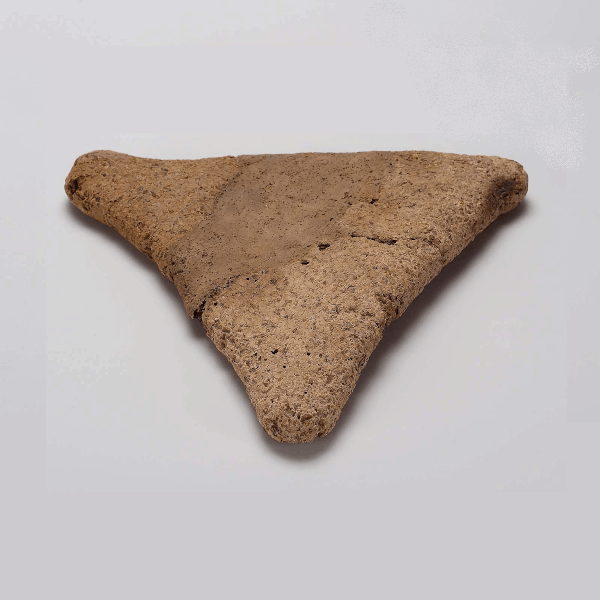 Ancient Egyptian rulers are famously known for their elaborate preparations for the afterlife. But it appears that one of their contemporaries may have exceeded their most ardent expectations to return to life, thanks to the efforts of a team that includes Richard Bowman, a University of Iowa doctoral candidate in biology.

The remarkable Saccharomyces cerevisiae rose again in July 2019, not where pharaohs were interred at Thebes, Egypt, but in Pasadena, California under the hands of Bowman’s co-conspirator and Xbox creator Seamus Blackley. Using Bowman’s scientific expertise, Blackley was able to extract a sample from an ancient loaf of bread that belongs in the ancient Egypt collection of the Museum of Fine Arts, Boston. With the extracted yeast and the same grains used by ancient Egyptians Blackley was able to re-create a loaf of ancient Egyptian bread.

Saccharomyces cerevisiae might be mistaken for the name of some fallen pharaoh, but it is actually a species of very common, but tremendously important yeast. The genus name Saccharomyces identifies it as a fungus that feeds on sugars, and cerevisiae hints at its relationship to beer. Without the services of S. cerevisiae you would not be able to celebrate a special occasion with a glass of wine nor enjoy the aroma of a freshly baked loaf of bread.

So what makes this story so special if S. cerevisiae is so common? This yeast did not need the protection of a massive pyramid nor a copy of “The Book of the Dead” to help guide it back to the land of the living. Assuming confirmation by genome sequencing, this yeast will have survived over 4,000 years buried in an Egyptian temple foundation deposit, due to its ability to arrest its metabolism and enter a quiescent (one might be tempted to say near deathlike) state called dormancy, which it does through sporulation when starved of nutrients.

Blackley and Bowman will continue collecting yeast samples from additional museums with artifacts that represent the Old, Middle, and New Kingdom periods of Egyptian history, a period that spans over a thousand years. After analyzing the yeast genomes from those samples, they hope to characterize the genetic changes that S. cerevisiae has undergone during that time, and publish their findings in a scientific journal. We eagerly await their report.

Check back for the next installment of this three-part series Rising Together: Yeast and Humankind. Thank you to Kai Weatherman for whipping up this stirring series! 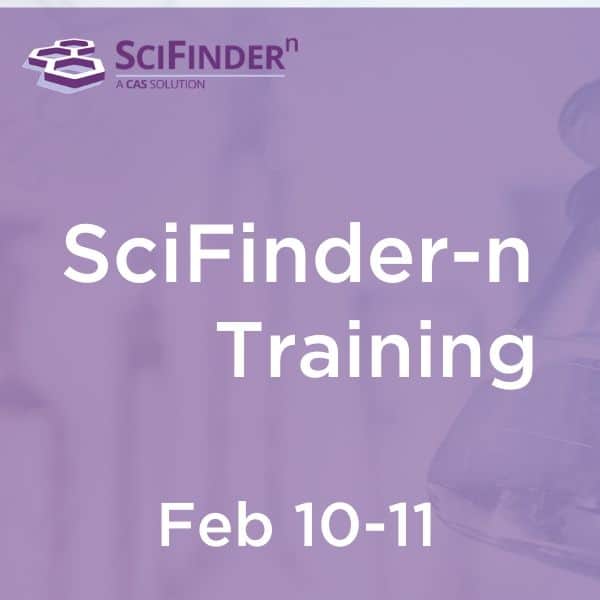 SciFinder-n is the new interface for SciFinder, a searchable collection of chemical reactions, substances, and scientific literature used in chemistry, medicine, and related fields. SciFinder-n is mobile-friendly, offers more filter options compared to SciFinder, and includes an “All Search” function similar to Google. PatentPak, MethodsNow, and Retrosynthesis Plan are new tools that are available only through SciFinder-n.

The following SciFinder-n training sessions are open to all students, faculty, and staff. There is no need to register in advance. Drop-ins are welcome!

SciFinder-n is available for free to all members of the University of Iowa community. Register for a SciFinder account on our SciFinder and SciFinder-n guide. 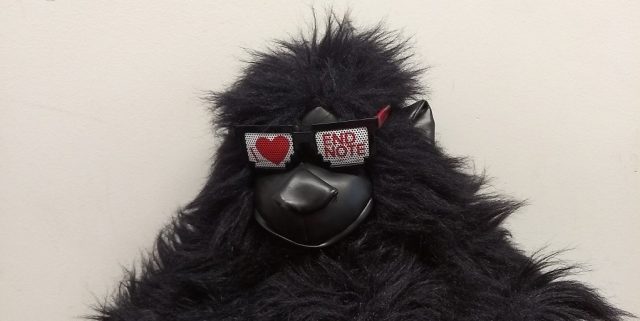