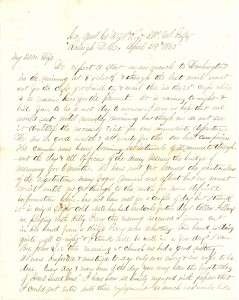 We expect to start on our march to Washington in the morning at 5 o’clock, & though the last mail went out for the Corps, yet I will try & mail this in the 23d Corps which is to remain here for the present.1 It is raining to-night & bids fair to be a wet day to-morrow. I was in hope that we would rest until Monday morning [May 1], but, though we do not see it, doubtless the necessity exists for our immediate departure.

We are in good health & all ready for this our last campaign. The cannon have been booming at intervals of 30 minutes throughout the day, & all Officers of the Army assume the badge of mourning for 6 months. We have not yet learned the particulars of the negotiations. Many vague rumors are afloat, but we must wait until we get through to the north for more definite information.

Chris [Yetter] has not been well for a couple of days, but I think it is only a slight cold. Nate [Hill] has had headache for two days. Allen Fellows in playing with Billy Perry this evening received a severe cut in his hand from a knife Perry was whetting.2 His hand is doing quite well to-night, & I think will be well in a few days. I saw Bro. John Lee this evening at Church. We had a good meeting.

We were inspected & mustered to-day; only once more, & we hope to be done. Every day & every hour of the day, you may hear the boys talking of “Home Sweet Home.” I have been so busily engaged with papers that I could not enter into their enjoyment as much as I would like.

By the time this reaches you, we will be doubtless at Richmond, Va., or beyond it. I hope to receive several letters from you there. I would like very much if our house could be vacated so that we might go immediately to housekeeping on my return, yet I can give no definite idea of the time we will reach home. If convenient for Mr. Mathis, ask him to leave by the 1st of June.

It is getting quite windy, & the light will not last much longer, so I will close. Remember me kindly to all our friends. Tell Maggie Gutherie that I did not get time to answer her letter here. Kiss Howard for me. May the richest of Heaven’s blessings rest upon you & preserve us for future enjoyment in this life. With much love, I remain, Ever,