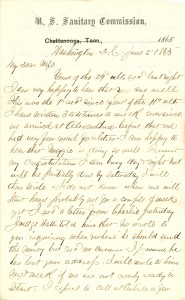 Yours of the 29th ult. recd. last night. I am very happy to hear that you are well. This was the 1st recd. since yours of the 11th ult. I have written 3 to 4 times a week ever since we arrived at Alexandria; before that we had very few mail facilities.

I am happy to hear that Maggie is doing so well. Present my congratulations.1

I am busy day & night but will be partially done by Saturday.2 I will then write. I do not know when we will start home, probably not for a couple of weeks yet.

I recd. a letter from Charlie [Culver] yesterday. Judge Watts told him that he wrote to you inquiring when & where he should send the money but recd. no answer.3 I presume he has lost your address. I will write to him next week if we are not nearly ready to start. I expect to call at Carlisle a few hours on my way home. I drew one hundred dollars from Watts by Charlie yesterday; it will be here to-day.

Mollie is lying very sick at the National Hotel, Washington. Bro. Wes’ Regt. has been sent north & is in camp near Philad. Penna. Wes will go as soon as Mollie can be removed. I have not had time to go & see them, but recd. a letter from Wes. I must close for the present.

May God bless you.
Your affect. Husband
J. F. Culver

Outreach and Instruction Librarian. Lover of coffee, as well as 19th century photography, painting, tourism and print.
View all posts by Colleen Theisen →
This entry was posted in 1865, June. Bookmark the permalink.