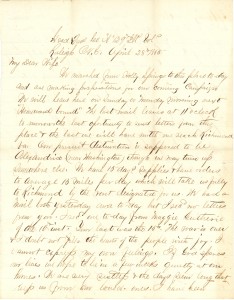 We marched from Holly Springs to this place to-day and are making preparations for our coming Campaign. We will leave here on Sunday or Monday morning next, “Homeward bound.” The last mail leaves at 11 o’clock to-morrow, the last opportunity to send letters from this place & the last we will have until we reach Richmond, Va.

Our present destination is supposed to be Alexandria (near Washington) though we may turn up somewhere else. We have 15 days’ supplies & have orders to average 15 miles per day which will take us fully to Richmond by the route designated for us.1

We had a mail both yesterday and to-day, but I recd. no letters from you. I recd. one to-day from Maggie Guthrie of the 10th inst.2 Your last was the 15th. The war is over, & I doubt not fills the hearts of the people with joy.3 I cannot express my own feelings. If God spares our lives, we hope to be in a few weeks quietly at our homes. We are very restless, & the days seem long that keep us from our loved ones.

I have been suffering for the last few hours from severe headache, but it will all be gone I hope by morning. I cannot say how soon you may look for us. We will doubtless be delayed at Alexandria a couple of weeks & possibly longer. I must try and get home to attend court the first Monday in June, & we may all possibly be there by that time.

The Campaign before us is a severe one. We sent to the rear to-day all that were not in good marching trim, of my Company, Haley, DeLong, Noyes, & Cook.4 They may reach home several weeks before us. All the rest of the Company are in good health. I cannot write much to-night but will try & add a few lines in the morning. Perhaps my head will feel better. Good night. May Holy Angels guard you & Our Father in Heaven keep & bless you.

I arose this morning in the enjoyment of excellent health. We recd. the order of march this morning & will be in Richmond by the 12th or 14th of May.5 We will have no mail facilities until we reach there. We will leave here either to-morrow or Monday. Joy fills every heart, yet there has been no demonstrations. A few more days hard marching, & we will be at Home. I must close as I am busy on the muster rolls & must complete them by noon. Let us thank God for all His mercies. Remember me to all. Kiss Howard for Papa.