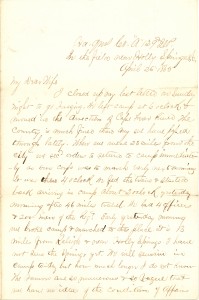 I closed up my last letter on Sunday night [the 23d] to go foraging. We left camp at 6 o’clock & moved in the direction of Cape Fear River. The country is much finer than any we have passed through lately. When we were 23 miles from the city, we recd. orders to return to camp immediately as our corps was to march early next morning.1 It was then 4 o’clock. We fed the train & started back, arriving in camp about 2 o’clock yesterday morning after 46 miles travel. We had 4 officers & 200 men of the Regt.

Early yesterday morning we broke camp & marched to this place. It is 13 miles from Raleigh & near Holly Springs. I have not seen the Springs yet. We will remain in camp to-day, but how much longer, I do not know.2

The rumors are so numerous & so vague that we have no idea of the condition of affairs. Genl. Grant is in Raleigh. We hear one hour that Johnson has surrendered which is discredited the next. Our movement in such haste rather implies an effort to intercept him if he attempts to turn our flank. We are marching light prepared for fight & are on half rations for 30 days. The boys are out foraging to-day to make up the deficiency.3 There has been a rumor afloat for the last two days that Genl. Sherman is relieved for halting at Raleigh & capitulating with Johnson instead of pressing forward. It will be a sad hour for this Army if it prove true.4

We met a great many of Lee’s army on their way home while we were out foraging Monday. I begin to think we have accomplished much more than we ever anticipated in this war, i.e., the subjugation of the South. Their spirit is certainly broken.

We are all in good health. This is a splendid country much resembling Northern Georgia. Large fine oak timber. It is a relief from the pine forests that have lined our march all the way through from Atlanta.

I recd. your letters of the 14th & 15th on my return Tuesday morning. I am happy to hear that your health is improving. Your letter of the 15th is the first intelligence I have recd. of Leander’s [Utley] success in his suit. Is he satisfied with the amount or does he value the mare at more; if so, find out the amount & I will pay it.

Father’s estate was settled April 1st, & the money should reach you by the 15th or 20th, yet it might be delayed a couple of weeks longer. Bro. John Miller will doubtless inform you when he pays over the money.5 If we stay here a few days & get fixed up a little, I will write again. Remember me kindly to our friends. Kiss Howard for me. May Our Father in Heaven bless you. Good Bye.