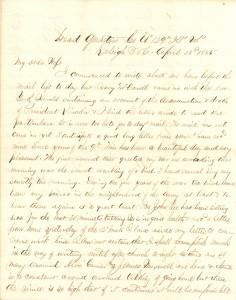 I commenced to write about an hour before the mail left to-day, but Harry McDowell came in with the New York Herald containing an account of the Assassination & death of President Lincoln, and I laid the letter aside to read the particulars. It is now too late for to-day’s mail. The mail has not come in yet. I anticipate a good long letter from you; I have recd. none since yours of the 9th.

This has been a beautiful day and very pleasant. The first sound that greeted my ear on awaking this morning was the sweet warbling of a bird. I heard several sing very sweetly this morning. During the few years of the war, the birds have been very scarce in the neighborhood of the Army, at least, & to hear them again is a great treat.

Bro. John Lee has been sitting here for the last 30 minutes talking. He is in good health & recd. a letter from home yesterday of the 12th inst. I laid aside my letter to converse with him. I am not certain that I shall accomplish much in the way of writing until after church to-night as there are so many around. Alva Garner & James Maxwell are here,1 & there is a constant crowd around, talking of going home; but then the wind is so high that if it continues it will be impossible to keep a candle burning to-night.

It seems as if the war was over.2 Everything bears the impress of the Holy Sabbath. We had an excellent meeting this morning. Genl. Class at 9-1/2 & preaching at 10-1/2. Our Brig. Church numbers 195 members, ten joined to-day. The ordnance [sic] of baptism was administered this afternoon; I was not out. Our night meetings continue to be very interesting; there were five at the Alter [sic] last night & some conversions every day during the week.

The news of the death of the President is now established beyond doubt, and the developments implicate the ‘”Knights of the Golden Circle.”3 I am not surprised. Everyone here when the rumor first reached us exclaimed that it was the work of the Copperheads. We have spent three years in honorable warfare; this event foreshadows what we must anticipate at our “Homes.” It will be much more difficult to meet successfuly, & many innocent will doubtless suffer with the guilty. But the issue must be met, & the Army is preparing for it. Genl. Sherman’s order indicates the line of policy to be pursued.4 The order proclaiming Peace has been delayed beyond our anticipations, owing no doubt to the change of the Government and the additional time required to define the policies to be adopted.5

I was interrupted by the return of Alva Garner & James McCabe.6 They remained for supper, & I had no opportunity to write before Church as I was notified that I must preach if the Chaplain of the 70th Ind. did not come, & as it was late & quite cool, I thought I would postpone writing until morning, but I have just been notified to be ready to start on a Forage Expedition at 6-1/2 A.M. I must close my letter to-night late as it is (10-1/2).

Your letter of March 12th directed to Charleston, S.C. has reached me this evening. All the questions I believe have been previously answered save one, & that is that it is Clymer who wishes to join our Conference. He is to be married in June or July. I recd. a note from Lou Fellows through Allen this evening, dated the 9th inst., the same date of your last letter recd. She was expecting you to pay her a visit.

I have no late news from Carlisle. I hope to find mail here for me on my return. We go with two days’ rations. Bart, Allen, & Burton got up last night from Charleston.7 All our friends here are in good health. I must close for to-night. Remember me in love to all our friends. Kiss Howard for “Papa”. Write very often. I hope soon to be “Home” if it be God’s will. May His richest blessings rest upon you. Good Bye.