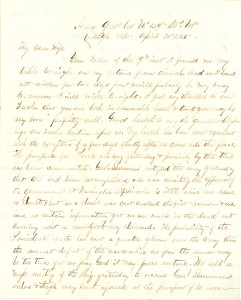 Your letter of the 9th inst. I found on my table to-night on my return from Church, and, as I have not written for two days past & will probably be very busy to-morrow, I will write to-night. I feel very thankful to our Father that you are both [Mrs. Culver and Howard] in reasonable health & trust you may be very soon perfectly well. Good health is one of the greatest blessings our Father bestows upon us. My health has been most excellent with the exception of a few days shortly after we came into this place.

The prospects for Peace are very flattering & possibly by this time has been consummated. Genl. Sherman notified this army yesterday that all had been accomplished, & he was awaiting the approval of the Government at Washington.1 If Lincoln is still alive, we have no doubts; but, as a doubt was cast around the first rumor & we have no certain information, yet we are much in the dark not knowing what a new Govt. may demand. The probability of the President’s death has cast a greater gloom over the Army than the severest defeat of this war, &, while we fear the rumor may be too true, yet we pray God it may prove untrue.2

We held a mass meeting of the Brig. yesterday to receive Genl. Sherman’s order, &, though every heart rejoiced at the prospect of so soon returning home, yet the occasion more resembled the commemoration of departed ones than the anticipations foreshadowed by the order. Cols. Case, Dustin, Doan, & Genl. Harrison addressed the meeting. Three cheers were given for Genl. Sherman & the Union restored, then every one retired to his Quarters.3 You receive all the news long before we do, as we are very far from our base of communication, &, before this reaches you, you will know all the results of present negotiations.

We have Johnson’s army securely hedged in, but it is not impossible that he might turn one of our flanks and get away should the present efforts fail to bring Peace.4 We have gone into camp here & are very pleasantly situated. I am busy with my Ordnance returns & other reports, preparing for our muster out of the service.

I am very much surprised at Mrs. Remick’s representations. I agreed if absolutely necessary to give $10—on the instrument but never thought or spoke of doing more. Do not agitate the matter by raising the question. I am very much grieved over misconduct of that kind. I have overlooked a great deal for I felt deeply indebted to the family for their kindness in my extremity, &, while I have often earnestly desired that the most friendly relations might ever exist between my family & theirs, yet I have no wish paramount to your happiness. I hope I never have, & by God’s grace, I never will lay any restrictions upon your judgment in your choice or rejection of friends and associations. Your opportunities for judging social character far exceed mine. I do not think I ever have informed you my real opinions of the worth or demerits of their society, yet I hope you will not think me unkind or thoughtless. I have thought in my own case that our obligations might be of such a nature as to overbalance everything of self but would never yield at the sacrifice of happiness or even feelings of love of those I love as life itself & better than all else save God. Believe me then, I confide wholly to your own judgment the selection of your friends & associates believing that I can fully enjoy with you all social blessings & believing also in my heart that you would readily yield as much and infinitely more to any request I might make.

I shall rejoice with you to find Howard well & able to creep when I return. I wrote from Goldsboro concerning Asa Alden & presume you have recd. the letter ere this. He is in the Hospital there & is doing very well. We had a letter from Henry Polk to-night from Dwight. I suppose all know he is safe ere this. The boys are all well.

Allen Fellows was in my tent a few minutes ago inquiring the news. As you did not mention Lou’s name, we presumed she was well. He has not heard from her since we left Goldsboro though I have recd. two letters. Bro. John Lee was here to see me this evening; he & Bro. Gaff are well.

We had a good meeting to-night, five at the alter [sic]. God is still with us. Pray for us.

Remember me very kindly to Mrs. Johnson & family. I feel that I owe them much for their kindness to you & their efforts to make you happy. I shall not forget their kindness should I be permitted to return home. Remember me kindly to all our friends. I have had so many things upon my mind all day that I cannot write with that ease I could wish.

By Genl. Harrison’s return, Col. Case comes back to the Rgt. Cris [Yetter] & Nate [Hill] are well. Cris seems to be bored somewhat over Lib Keif’s fortune and his. Nate says he intends to get married & settle immediately. I suggested to the boys that there was one portion of the military drill they should study more closely now: that is the “guard against Infantry. ”

From present prospects, we all expect to start for home in a few weeks. “Home, Sweet Home.” These war worn veterans are well prepared for its enjoyments. I trust in God we may lose none of our numbers before that happy time arrives.

I must bid you “Good Night.” The wind is troubling my candle & will soon leave me in darkness. May Our Father in Heaven bestow upon you the riches of His grace & our hearts’ most ardent desires be speedily granted.