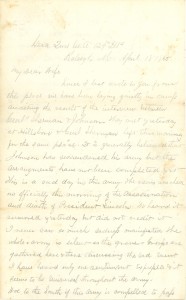 Since I last wrote to you from this place we have been laying quietly in camp awaiting the result of the interview between Genls. Sherman & Johnson.1 They met yesterday at Hillsboro, & Genl. Sherman left this morning for the same place. It is generally believed that Johnson has surrendered his army but the arrangements have not been completed yet.

This is a sad day in the army. The news reached us officially this morning of the assassination and death of President Lincoln.2 We heard it rumored yesterday but did not credit it. I never saw so much sadness manifested. The whole army is silent as the grave. Groups are gathered here & there discussing the sad event. I have heard only one sentiment expressed, & it seems to be universal throughout the army. Woe to the South if this Army is compelled to pass through it again. Woe to the Rebel Army that compels us to fight longer, & Woe to the copperheads of the North. You cannot imagine what deep hatred exists against the latter class.

The army expects to be mustered out next month. We all anticipate spending the 4th of July at “Home.” There is no possible escape of Johnson’s army, & the news of Forrest & Rhoddy’s capture have reached us.3 As Johnson has command of all the rebel armies in the South, we expect their Surrender to Sherman before these negotiations close.4

Yesterday the news would have been received with wild acclamations of joy, to-day there would be no outburst at all. We have a meeting of the Brigade at 6 o’clock this evening to pay due respect to the dead. May God be merciful to us in our great affliction.

The weather is beautiful. Our meetings continue, & God is doing a great work for us. There were 10 forward Sunday night & 9 last night & numerous conversions. Over 160 have joined the church. The attendance is very large. I preached last night from Mark 16 Chap. & 16th V., & God was pleased to bless me.

All are in good health. I saw Allen Fellows this morning, Bros. Gaff & Lee yesterday. All well. I cannot find my ink & Yetter is on Picket, so you must excuse the pencil this time. My heart is too sad to write much to-day. We have recd. no mail yet. I will write soon again if we do not move. We will not remain here long as it is too far from our base of supplies. We will either go North or South. Write often. Give my love to all. Kiss Howard for me. May God bless you with His richest blessings. I remain, Very affectionately,