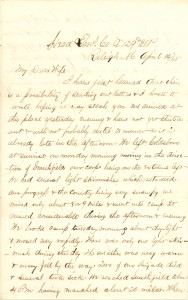 I have just learned that there is a possibility of sending out letters, & I haste to write hoping it may reach you. We arrived at this place yesterday evening & have not yet started out & will not probably until to-morrow as it is already late in the afternoon. We left Goldsboro at sunrise on Monday morning [the 10th] moving in the direction of Smithfield, our corps being on the extreme left. We had several light skirmishes which retarded our progress; &, the country being very swampy, we moved only about 8 or 9 miles & went into camp. It rained considerable during the afternoon & evening.1

We broke camp Tuesday morning [the 11th] about day-light & moved very rapidly. There was only one light skirmish during this day. The weather was very warm & many fell by the way. Two of our Brigade died & several took sick. We reached Smithfield about 4 P.M., having marched about 20 miles. When we halted for dinner, I had but six men of my Company with me, all the rest had fallen out. At Smithfield we recd. the news (official) of the surrender of Lee’s Army.2

At an early hour on Wednesday [the 12th], we started for Raleigh,3 our Brig. acting as train guard until near noon. There was skirmishing in our front but done by Kilpatrick’s Cavalry. In the evening the cavalry captured over 60 wagons loaded with ammunition.4 It was the rear of the Rebel Army retiring from Smithfield. We marched about 16 or 18 miles & went into camp near Swift Creek at about 4 P.M.

Yesterday morning we started at daybreak for this place anticipating a hard day’s battle.5 After moving about 5 miles, we heard the cannon booming in our front, & we supposed the time was near at hand but we kept moving on & on until we came in sight of this place but found no enemy. It seems that the 14th Corps having had some ten miles the shortest route, were two or three hours in advance of us & kept up a skirmish with the Rebel rear guard.6 We are therefore in possession of Raleigh without a battle.

We have lost track of Johnson’s [sic] Army which accounts probably for our stay here to-day.7 Gov. Vance surrendered the city on the approach of our army.8 There are a vast number of Rebel sick & wounded here with their Surgeons, nurses, &c. I was through the City this morning. It is quite a small place, though in its prosperity has been beautiful. The Rebs blew up the depots.

Citizens say that Johnson’s Army passed through in great haste the evening before we came & that Johnson declared he would not fight another battle. They have no Official news of the surrender of Lee’s Army, Grant having destroyed their communication. Some of our boys saw a rebel soldier who was present when Lee surrendered but escaped afterward & reached his home. He was hid while Johnson’s Army passed through but made his appearance this morning. He said that all of Lee’s Army supposed Johnson had surrendered to Sherman. Unless Stonemann’s or Sheridan’s cavalry stop him, we will have a severe foot race yet.

The prospects look glorious. Let us praise God for all his blessings. We had good meetings after going into camp at Smithfield & Swift Creek & a most excellent one here last night. There were three forward for prayers, & God was with us.

We recd. to-day New York papers of the 7th with full acounts of the battles. This is doubtless a day of great rejoicing in the north as it has been set apart especially for that purpose.9

I have felt like getting home soon. I do not think we will have any more severe battles. So far as we have learned, Johnson’s Army is very much demoralized & have no intention of fighting longer if they can help it. May God grant us a bloodless victory. I am unable to see what they can gain by holding out longer. The train is expected from Goldsboro to-morrow, but, as all our mail was ordered to Fortress Monroe, I cannot expect a letter.10 We are all well. The weather is very pleasant though a little warm. We have a beautiful camp in a pine grove near the city.

Give my love to all. Kiss Howard for Papa. May Our Father in Heaven keep & bless you. With much love, I remain