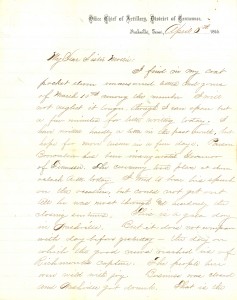 I find in my coat pocket eleven unanswered letters and yours of March 10th among the number. I will not neglect it longer, though I can spare but a few minutes for letter writing today. I have written hardly a letter in the past month, but hope for more leisure in a few days. Parson Brownlove has been inaugurated Governor of Tennessee. The ceremony took place at eleven oclock A.M. today. I tried to hear his speech on the occation, but could not get out till he was most through and heard only the closing sentences.

This is a gala day in Nashville. But it does not compare with day before yesterday – the day on which the good news reached us of Richmond’s capture. The people here were wild with joy. Business was closed and Nashville got drunk. That is the usual mode of holding celebrations among the [genuine chivilry?]. There were but few long faces to be seen on that occation. I know of one school-marm that cried over the ruins of her dear Confederacy. I presume her tears were bitter ones, but I had no sympathy for her, or with her. Mollie, the war closes this month. What do you think of that? Frank and Sammy and I will be home in a few days.

I have not been promoted. My rank is no higher than Lieut. I did think that my salary would be increased, but it is not. I shall probably remain here during the remainder of my term of service. I have concluded that it would be better for me to connect myself with one of the churches here in Nashville and have sent to Mr. Johnston for a “letter” from our church. When that reaches me I will unite with the 2d Presbyterian church. I attend there now, and feel very much at home among that people: we have a fine large Sunday school. It is a thoroughly loyal church. They have “Sociable” on Tuesday evenings, to which soldiers are espeically invited. I have attended but one of them yet, but will go as often as my time will permit. The people are very friendly and sociable. I have many more invitations to call than I can attend to. I will soon have more leisure, then I will do some visiting. I have not yet heard from Frank, nor from Sammy recently. Our Battery is now at Cleveland Tenn. Mollie, I had a good long letter from cousin Lizzie Donaldson three or four days ago. I am indebted to Tom’s visit for that. She is teaching school now. Has a large school and an assistant teacher.

Mary, I’ve made thre acquaintance of a young lady here, whom I would marry (if I could) if she was a Christian. I don’t wish to convey the idea that she is a heathen – but she is unconverted. She is a northerner though her father’s family are now living here. She sings splendidly (that’s what takes my eye) and play on melodion finely. She is good looking, is about as tall as Maggie, 19 years old, but she is “without money and without price.” That last consideration, however, would not make the least difference with me. She is rather wild. I call to sing with her occationally.

Tell Leander to write to me. And all of you as often as you may.

With love, Mollie,
Ever Your Affectionate Brother
Wm J. Murphy