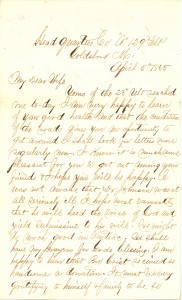 Yours of the 23rd ult. reached me to-day. I am very happy to learn of your good health and that the condition of the roads gives you an opportunity to get around. I shall look for letters more regularly now. I know it is much more pleasant for you to get out among your friends, & I hope you will be happy.

I was not aware that Dr. Johnson was at all seriously ill.1 I hope most earnestly that he will heed the voice of God and yield submissive to His will. He might do much good in Pontiac. He shall have my prayers for God’s blessing. I am happy to hear that Bro. Crist received so handsome a donation. It must be very gratifying to himself & family to be so substantially remembered. I thought I had answered Sister Kate’s letter. I must try and write to her before we leave here.

You need feel no alarm about the insurance on our property. You recollect you have both policy & receipt. The last policy is a new one which accounts for the notice. Had the old one been only renewed, the notice would not have been sent.

I would like to receive a box from home as you desire, but I am in need of nothing, & it is not probable it would ever reach me.

We had a good meeting to-night, & God was pleased to bless several souls. The meetings in the 2nd & 3rd Brigades have not closed yet though it is nearly ten o’clock; I hear they are resulting gloriously. May God continue the good work.

Capt. Wm. Strawn of the 104th Ills, was here to see me to-night.2 He lives near the line between Newton & LaSalle County. You doubtless remember him.

The news from the North to-day are very flattering.3 We have Division Review to-morrow at 8-1/2 A.M. which indicates an early departure. It is generally thought, however, we will not leave until Monday, yet it may be before or after. Our Army was reorganized: the 15th and 17th Corps forming the Army of [the] Tennessee, the 10th and 23rd Corps the Army of [the] Ohio, & the 14th and 20th Corps the Army of Georgia. We belong to the latter & will be the left wing, &, as a matter of course, farthest from the coast.4 It is very probable that we will have very few mail facilities, but I hope you will write every day, & I will do so every opportunity.

Bro. Jim Gaff was here to-day; he is quite well. Capt. Reed has been ailing for a few days but is around again. The health of the Regt. is good. Bronson’s discharge papers have not been received yet, but I look for them every day. I think the idea of paying the Army before we leave has eked out. I see no signs of a Paymaster at present. We are almost fully equipped & lack only a few pairs of shoes. There is an immense quantity of “Grape Vine” afloat to-night, & there has been cheering all along the lines of the army for 4 hours past. Nothing reliable has been received, however, that I can learn. The Army is in jubilant spirits, & I should not be surprised to hear of marching orders any day.

Chris & Nate have been fast asleep for an hour. I wish I could look in upon you to-night. May God bless you & our babe & preserve you both in good health. May His richest blessings of health & happiness be yours and the enjoyment of many years in such home joys & comforts you have so patiently awaited and which you so richly deserve. Kiss Howard for Papa & love to all friends. With love and affection, I remain,