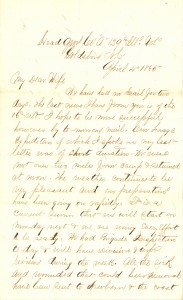 We have had no mail for two days. The last news I have from you is of the 16th ult. I hope to be more successful, however, by to-morrow’s mail.

Our Forage Expedition of which I spoke in my last letter was of short duration. We were not over two miles from camp & returned at noon.1 The weather continues to be very pleasant, and our preparations have been going on rapidly. It is a current rumor that we will start on Monday next [10th], & we are using every effort to be ready. We had Brigade Inspection to-day & will have Division & corps reviews during the week.

All the sick and wounded that could bear removal have been sent to Newbern & the coast. The detachments of this army are coming up from Nashville, Tenn., Charleston, & Blairs Landing, S.C. & will soon all be here.2 The troops are nearly all supplied with clothing, and a very few days will suffice to complete their equipment. The news by the New York papers of the 29th ult. are good, and I hope by God’s help we will soon see the end of the war.

We are having a glorious meeting in the Brigade. The Regts. have joined in a Union meeting, & we have a very pleasant place for worship. There were 13 forward to-night. This was our first effort united. I preached to-night from 95th Psalm, part of 7th & 8th verses. God was pleased to bless me, and we hope for glorious results during our short stay here. Pray for us.

The health of the Company and Regt. is good. Bronson’s discharge has gone forward, & I think he will be able to start for home in a few days.3 He is in very poor health, & I fear will not survive long. We have heard nothing of Henry Polk yet; we expect daily to hear of his return home. Several of the boys that were captured about the same time he was have reached their homes & have been heard from.

Capt. Horton arrived here to-day from Blairs Landing. Genl. Ben Harrison will be up in a few days & will doubtless command the Brigade in the coming campaign.4 Jim Chritten, Winnie Kelley, Mat. DeLong & Wm. Sutcliff are on their way & will be here this week.5

It is quite late to-night, but I could not lie down without talking awhile with you. There is a string band serrenading Lt. Col. Merrill of the 70th Ind. & the music sounds very sweet. The moon shines beautifully every night. Everything seems so calm and beautiful to-night that it seems almost impossible that such a thing as war can exist. How forcibly it reminds me of a night long ago when we sat at Mother’s door one night singing “With Maggie by our side.” Do you remember it? I wonder if Maggie [Utley] does. It was before you went to Cleveland to school. Those & many others that followed were happy days, yet I trust there are many more equally happy in store for us. God is kind and merciful, let us trust him still.

Nate [Hill] has gone to bed & is asleep. Christ [Yetter] is writing yet. I am sure he writes 4 letters to my one. I was not aware before that he had so large a correspondence. Mrs. Hill wrote to him a few days ago that she knew I was responsible for Jennie Gutherie’s refusing Kelley; I hope she is mistaken. I only spoke once to her about it & that was after her father & mother assured me that they would not be married. I am very sorry that I even spoke of it.

I must close for to-night. May God bless you. Kiss Howard for me. Remember me kindly to all our friends. As communication will be kept open with the rear, I hope to hear from you often. Good night.