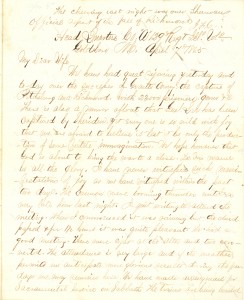 We have had great rejoicing yesterday and to-day over the success of Grant’s Army, the capture of Petersburg and Richmond with 23,000 prisoners, guns, &c.1 There is also a rumor afloat that Genl. Lee has been captured by Sheridan,2 yet every one is so wild with joy that we are afraid to believe it lest it be only the production of some fertile imagination. We hope, however, that God is about to bring the war to a close. To His name be all the Glory.

I have never witnessed such manifestations of joy as we have witnessed within the past two days. The cannon were booming thunder until a very late hour last night. I quit writing to attend the meeting. When I commenced, it was raining, but the cloud passed & for 1-1/2 hours it was quite pleasant. We had a good meeting. There were eight at the altar and two converted. The attendance is very large, and, if the weather permits, we anticipate more glorious results during the few days we may remain here. We have made arrangements for Sacramental Service on Sabbath.

The trains are being loaded, and we expect to move on Monday. The successes of Grant’s Army will doubtless change our programme materially. Orders were received this evening to move light for a rapid march, &, if we have to get to the rear of Lee’s Army, it will be a severe chase.3 This Army has had so much experience in marching that I fear my five months’ idleness will be a decided disadvantage.

All the company are well. Asa Alden of Co. “G” was removed to the hospital quite ill.4 I sent a letter yesterday by McDonald of the 53rd Illinois whose time is out, & he was going direct to Pontiac.5

I was disappointed in not receiving a letter from you to-day, but Bro. Gaff had a letter of the 26th March in which his wife said she had seen you at church that day and you were well. Allen Fellows has been a little under the weather for a few days but will be all right in a few days. The health of the Regt. is good.

There has been a continuous shouting all along the lines of the Army to-night, & several Batteries have fired salutes. We recd. New York papers of the 3d & Newbern dispatches of the 6th to-day. We have details of the battles before Richmond on the 31st, 1st, & 2nd. All that we have heard since is what is termed grape vine. We were reviewed yesterday by Maj. Genl. Mower, our new corps commander. He is a fine looking Officer & has the reputation of being a good fighter.6

It has ceased raining again, & we hope the few [remaining days we stay here may be bright and pleasant. I have not been able to banish from my mind for the last two days the probabilities of a speedy termination of the war and the prospect of soon getting home. God grant that it may be so, yet it is not safe to be too sanguine. It is almost too much to hope for so suddenly, & disappointment would be terrible.

The mails will either confirm or deny these rumors to-morrow. We find it impossible to get a paper for a day or two after it gets here, the demand is so great. Again the cannon are booming all around the lines, & the cheering commencing in Goldsboro goes round from camp to camp until the sound dies away in the distance. It has heretofore been a certain indication of battle when so many rumors became rife in camp. It was so before every severe battle of last summer’s campaign.

We hear the bands striking up in the direction of Goldsboro, &, if any news is passing, ours will be out when they reach here. I wonder if the Army will become quiet at all to-night. It is near ten o’clock. I am afraid that whiskey may have a hand in, yet none has been issued that I know of. Green was very happy to-day over the news, but said he was trembling for fear they might not prove true. [We] have heard of no enemy in our immediate front for several days, & refugees coming into our lines report Raleigh evacuated and all the Rebs gone to Lee.7

Stoneman with our cavalry & one Division of the 4th Corps is reported at Boon, N.C. which is about the same distance from Danville that we are, but the country very mountainous.8

I will not close my letter until I learn if there is anything new. The bands of the 14th A.C. on our immediate left are out playing, & the boys are getting up to learn if possible what the excitement is. The cannon still keep firing.

God has been very kind to us this far, though there has been so much wickedness He has not cast us off. I hope to hear from you by to-morrow’s mail. I think my letter from Kinston [dated March 24] informing you that I was near the Army must have reached you in time for your answer to reach me here, & I expected a letter every day when you knew I was with the Regiment. I wrote a letter to the “Sentinel” night before last, also one to Mother. I have been expecting news from Carlisle all week but have heard nothing yet.

How I would like to be with you to-night that we might rejoice to-gether over the glorious news. Kiss Howard for me. May Our Father continue his blessings toward us. Remember me kindly to all our friends. The Army is becoming quiet, & we have learned nothing yet. I will leave my letter open until morning & add any news we may receive. I can imagine yourself & Howard sleeping sweetly & with thoughts of home and joy I must say Good night.