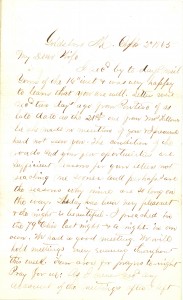 I recd. by to-day’s mail yours of the 16th inst. & was very happy to learn that you are well. Letters were recd. two days ago from Pontiac of as late date as the 21st, one from Mrs. Fellows, but she made no mention of you & I presume had not seen you.1 The condition of the roads and your few opportunities are sufficient reasons for your letters not reaching me sooner and perhaps are the reasons why mine are so long on the way.

The day has been very pleasant, & the night is beautiful. I preached in the 79th Ohio last night & to-night in our own. We had a good meeting. We will hold meetings every evening throughout this week. Four arose for prayers to-night. Pray for us. As I never recd. any account of the meetings after I left, there must be some letters that did not reach me.

I will try and write to Maggie [Utley] before we leave here but dare not promise positively. Tell her I will do the best I can. I thought I should write several letters to-day, but I was very tired & thought it best to rest in order to be ready for the morrow.

I was glad to hear that Howard is growing so rapidly as it is a sure indication of good health, yet I know he must be a great burden to you. I wish I could assist you to take care of him this summer, but, if God spares me, I will try & assist you more than when I was last at home. I feel very sorry when I think how little I done to make you happy while I was at home. You have not told me whether you expected to be able to visit Penna. next fall or not.

Alva Garner and Josephus Ullery took supper with us this evening. Both are well. I was at the hospital to see Mark Stephens yesterday; he is getting along very well & expects to go home on furlough shortly.

The Chaplain preached the funeral sermon of those who have fallen since the Regt. left Atlanta.2 All the detachments of Sherman’s Army from Chattanooga and along the coast are expected here in a few days. The Army will be made as effective as possible, and be prepared for the strongest opposition the Rebs. can muster.3 We have had all kinds of rumors to-day, the wildest being that Peace was declared & the Army ordered north.4 Our latest news is the New York Herald of the 27th containing a short account of Grant’s last battle.5 The prospects look flattering but not enough to dispel our anticipations of a severe campaign.

I have not yet written to the Sabbath School. I may try to to-night if I am not too late in closing this. Alf Huetson was here to-day. He inquired very particularly about you & wished to be kindly remembered. I will inclose a little shell that was picked up in “Fort Fisher” by an Officer of the 23rd Corps.

Among the numerous grape vines this evening, was one that our Corps was going to Washington to relieve Hancock’s Veteran Corps.6 Sherman has returned, & we are ordered to be ready to move by the 10th inst. which will be one week from to-morrow.7

Our camp is very nicely fixed up with pine trees lining both sides of all the streets. The boys have built comfortable houses and was there any prospect of remaining here long enough to justify it, we could make this camp very beautiful.8 We have good water in abundance which is a great blessing.

Some of the members of our Regt. captured on this last raid have been exchanged and are on furlough home. We hope to hear from Henry Polk soon.9 I have not yet written to his parents hoping to see or hear from him each day.

I hear trains whistling for the last hour. The rail-road is complete from Wilmington to this place giving us two avenues of communication with the coast.10

I see by the New York papers of the 27th inst. that both Wilmington and Charleston are soon to be made “Ports of Entry” which is certain evidence of the determination of the government to garrison and hold them. They will be garrisoned, doubtless, with colored troops while all the others will be sent to the front.11 There is one Division of Colored Troops here, but I have not learned where they are stationed.12 The Regt. of which Jos. Z. Culver is adgt. is in the Division;13 I would like to see him.

I sent ten dollars in a letter I sent by Wm. F. Sailor to be mailed at Chicago, Ills. Chris [Yetter] asked me just now whether you had forgiven him for the letter he wrote to you over a year ago; he says you have never written to him since. I had forgotten all about it but have an indistinct recollection of the affair.

We have just recd. orders to be ready to go on a forage expedition at 6-1/2 A.M. to-morrow. The whole Regt. is ordered out, &, as we will probably have a hard day’s march, I cannot write any more letters and must close this one soon. I hope there will be some letters awaiting me on my return. How cheering it will be.

I am glad you are contented, & I hope God will make you happy. I spent your birthday [March 17] in Charleston. Had I thought of it, I would certainly have written, but I have been very thoughtless lately. I know not why.

Remember me kindly to all our friends. Give my love to Maggie & family. What is Bro. John’s address? How I wonder how you are enjoying yourself to-night & where you are. I can imagine both Howard & you in bed sound asleep. May Our Father kindly watch over you & preserve you. Kiss Howard for me. I will write soon after my return. I do not know how long we will be absent but probably not over one day. Accept a kiss. With much love, I remain,