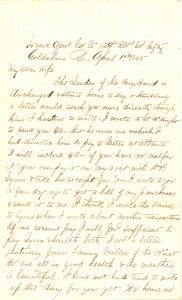 The Leader of the Brig. Band is discharged & starts home to-day & thinking a letter would reach you more directly through him, I hasten to write. I wrote to Lt. [John] McKnight to send you $12 that he owes me & which I had directed him to pay to [Christ] Yetter at Atlanta. I will inclose $10 — if you have no use for it, you can pay it on my acct. with Wm. B. Lyon & take his receipt for it.

I wrote to you a few days ago to get a bill of my purchases & send it to me. I think I wrote the same to Lyon when I wrote about Mother’s transactions. If we receive pay, I will ford. sufficient to pay Lyon & Smith both. I recd. a letter yesterday from Fanny Miller of the 19th inst.

We are all in good health, & the weather is beautiful. I have not had time to write up that diary for you yet. We have no late news. All the company are well. I expect letters from you by to-day’s mail. Letters come through from home, some in 10 to 12 days.

Rumor says we will leave here on the 12th, but no one knows as Genl. Sherman has not returned yet.1 No enemy have been seen on our front for a couple of days. Alva Garner of the 20th Ills. has just come & brings a New York Herald of the 27 Mch.2 The news are very good.

I have been talking until my time for writing has almost expired. Sailor3 leaves at noon from Brig. Hd. Qurs., & it is after 11. I must send this over, or it will be too late. Remember me to all our friends.

With much love, I remain, ever
Your affect. Husband
J. F. Culver