William Oscar Perkins and Henry Southwick Perkins, The Nightingale: A Choice Collection of Songs, Chants and Hymns, Designed for the Use of Juvenile Classes, Public Schools, and Seminaries; Containing Also a Complete and Concise System of Elementary Instruction (Boston: Oliver Ditson, 1860)

Advertised in University catalogues as providing “peculiar advantages to students,” the University of Iowa’s first music courses utilized a repertoire grounded in larger, nineteenth-century trends in American music education and represent the subject’s institutional foundation at the University prior to the establishment of a permanent School of Music.1 The academic sessions, held annually at the local Normal Academy of Music, were created to “give complete courses of instruction” in music performance, “both vocal and instrumental.”2 Written in part by the institution’s founding principal Henry Southwick Perkins, The Nightingale demonstrates a direct connection to the beginnings of American musical education itself. Originating in the eighteenth century, singing schools flourished throughout the United States with the use of simple songs arranged in three or four parts, a method standardized by eminent music educator Lowell Mason of Boston in the 1840s.3 Perkins himself studied under Mason and operated singing schools nationwide and, as such, prefaced his manual with a course of instruction for music beginners.

Beyond its pedagogical contents, The Nightingale features nearly two hundred pages of part-songs composed by prominent American composers that often reflect nationalistic themes. From the patriotic “Hail Columbia” and “Our Country’s Flag” to hymns by Perkins himself, the academy founded its day-to-day music instruction on domestic educational methods and a national repertoire.4 Perkins’s own patriotic anthem, “My Native Hills” (shown here), is descriptive of both its American surroundings and democratic ideals when it asserts that “my native hills are thine.” In addressing the goals of the volume, Perkins wrote that the selections are “pleasing and practical in character . . . [and] may contribute largely to the pleasure and education of the rising public,” a testament to egalitarian impulses of the nation’s then-budding public music education.5 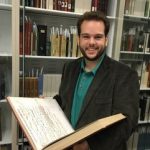 Cody Norling is a PhD student in historical musicology at the University of Iowa. Apart from his research on American operatic traditions, he maintains research interests Midwestern History and has contributed writing to the Annals of Iowa and a forthcoming volume on nineteenth-century identity formation in the Midwest. Cody is currently the instructor for a course titled “Midwestern Identities” in the University of Iowa’s Department of Rhetoric.