2019 was a busy year for the Rita Benton Music Library at the University of Iowa.
Here are a few highlights! 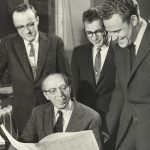 Student from Dr. Suhadolnik’s Fall 2018 American Music seminar mounted the exhibit, “Exploring Our Sounds: Traditions of American Music Making at the University of Iowa.” The exhibit stayed up through August 2019 and examined curriculums, student musical life, and composers. Learn more > 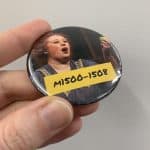 The Library was at the School of Music’s Audition Day, connecting with potential students and chatting with current ones. Button making was on the menu again, this time featuring photos of UI students with their instruments or singing in opera or chorus – and of course, imprinted with library call numbers! 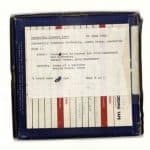 In March, the Library was at the School’s Donor Appreciation Concert talking about the School of Music Recordings Archives with alumni and donors. We had old concert and recital programs dating back to the 19th century, as well as demos of the digital archiving of recordings, both audio and video. Learn more > 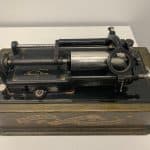 In April, Alan and Ann January donated over 150 wax cylinders and a gramophone player to the Music Library. In May, we found out that 13 of the cylinders were one-0f-a-kind early Czech music recordings made in the United States by jeweler Eduard Jedlička. Learn more > 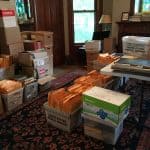 May was momentous, as the Music Library helped local musician and donor Carey Bostian begin the process of transferring the James Dixon Papers to the University’s archives. Three van loads later, and the Library’s Seminar Room was FULL with the over 2,000 scores and 30 boxes of papers belonging to Dixon and his mentor, Greek conductor Dimitri Mitropoulos. The rest of the summer was spent sorting the score collection in preparation for preservation and exhibition. 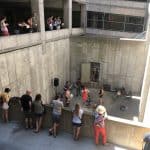 In June, Library Assistant Christine Burke and her ensemble performed one of her compositions in [ramp] fest, a concert sponsored by the UI Stanley Museum of Art in the Tower Parking Garage. Christine’s works have been performed this year in Los Angeles, Chicago, Columbus (OH), Pittsburgh, and of course, Iowa City! One of the performers in the ensemble was student worker and Bentz Scholarship winner, Alex Spenceri. Learn more > 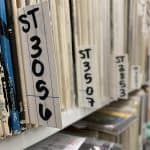 In August, the Music Library moved over 10,000 LPs to the Libraries Annex facility. An additional 2,000+ titles were withdrawn (duplicate with online or CD content). Around 3,000 titles remain in the Music Library; mostly jazz, UI recordings, saxophone literature (supporting the Iowa Saxophone Archive), and other unusual or semi-rare items. Annex LPs are still available to patrons via request in InfoHawk+/Aeon. The relocation of the LPs provided the Music Library with much needed processing and storage space. 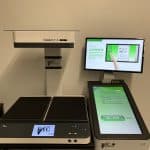 In honor of his receiving two awards from area organizations this fall, the Music Library mounted an exhibit of materials about world-renowned bass-baritone and Iowa graduate, Simon Estes. Dr. Amy McBeth curated the display which reviewed his time as a student, his exceptional career, and his philanthropic work.

The Libraries installed a second overhead scanner, this time in the adjacent ITC. Now students can scan materials when the Library is closed, but the ITC is open. This purchase was suggested by Library Assistant Amy McBeth and supported by Library Administration. 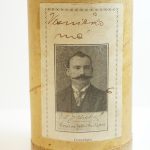 The Music Library took 16 brown wax cylinders to the Media Digitization and Preservation Initiative at Indiana University to be digitized. Two of the cylinders turned out to have been made in Cedar Rapids, Iowa. Librarian Katie Buehner and Czech audio archivist Filip Šír will present about the cylinders at the 2020 International Association of Music Libraries, Archives, and Documentation Centres (IAML) meeting in Prague. More news about the Jedlička Czech cylinders will be forthcoming in 2020. 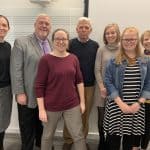 A new exhibit case arrived at the Music Library that will be used to display items from the Canter Rare Book Room. Thanks to Daniel Benton and Library Administration for supporting this purchase.

The Music Library was on hand with a pop-up library to accompany a performance by pianist Sarah Cahill of her show “The Future is Female.” Scores by the performed composers were available for check out, and the button maker was busy (again) creating buttons featuring the composers. 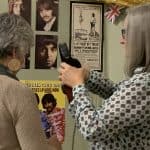 Every semester, the UI Catering hosts “Lunch with the Chefs,” which is a “pop-up lunch” based around a theme. This fall’s theme, “The Beatles – Come Together!” was a perfect match for the Music Library’s collections. Working with UI Special Collections, the RBML created a pop-up exhibit of vinyl records, books, and other materials drawn from Donna Parsons‘ excellent Beatles collection. The whole exhibit was staged in a fake teenager’s room, complete with posters, magazine, bean bag chair, a turntable, and OF COURSE Wulfie Parsons! Learn more >

In response to student feedback, the Music Library utilized the Seminar Room as a Music Graduate Student Lounge during Finals Week. Students (and Wulfie) seemed to enjoy having a space all their own, where they could concentrate and have ready access to caffeine, which means we’ll do it again this coming Spring. Learn more> 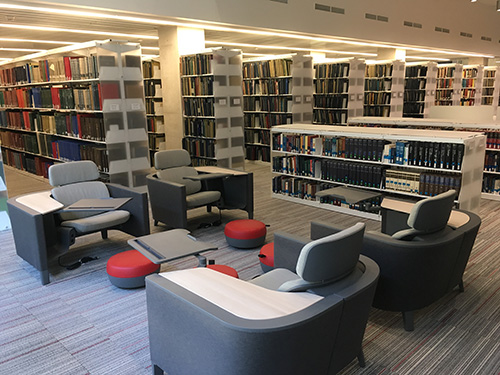 2016 was a momentous year for the Rita Benton Music Library at the University of Iowa, largely defined by the move into a beautiful, new facility in the Voxman Music Building eight. Here is our review of the year’s events at the Library, including highlights, predicaments, and a few peculiarities.

The School of Music’s Center for New Music donated its papers and library of scores to the Music Library in 2013.  Most of the scores and all of the papers have been processed, but as of January, there were still some loose ends.
In order to organize scores that were separated from parts or otherwise incomplete, the music librarian and catalogers unboxed and sorted over 800 scores in a single day. Many scores from the Center’s collection are now cataloged and available in the stacks (search for “Center for New Music, donor” in InfoHawk+).

The Library staff met with campus planners and the local architects and designers to review swatches and furniture selections for the new Library. Some selections changed – for example, the red and brown fabric was dropped for the upholstery on the library’s large chairs and replaced with a taupe covering and the heavy red felt for the window benches replaced with a neutral gray, but the bright red wall finishes, striped carpet, and smooth black and gray finishes for the stools remained.

In March, music librarian Katie Buehner went on a tour of the Voxman construction site. The Library was still very much a work in progress. Changes made since her previous visit in June 2015 included drywall throughout and compact shelving track being laid in the workroom for the media stacks. 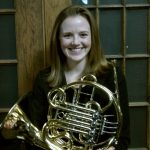 June was the first month of work for the Library’s new full-time staff member, Megan Small.

Megan oversees course reserves and works on digital projects, such as adding streaming audio recordings to the Iowa Sounds collection in the Iowa Digital Library. She supervises the Library during evenings and on the weekend.

Megan worked previously in the library as a Graduate Assistant before heading to Hungary in 2014-2015 on a Fulbright Scholarship.

On July 26th, the very first cart of books made the trip from the second floor of the Main Library to the first floor of the Voxman Music Building. Professional movers used gondolas, or deep shelving units on wheels, to transport the Library’s 205,000 books, scores, journals, microfilms, and recordings a mere three blocks away to the corner of Burlington and Clinton.

In the first few days of the move, the library staff members reset the height of almost every shelf in the Library to facilitate the offloading of the gondolas. Excess shelving was temporarily stacked by the west window that overlooks the loading dock.

On August 5th, the final book was shelved in the new Music Library. The Library’s temporary shelving in the Main Library was already being reconfigured to hold different collections.

The Music Library was closed to the public from July 26-August 21 because the Voxman Music Building was still an inaccessible construction site. In that time, the staff worked to prepare the collection and facility for the Fall semester and most the new furniture was installed. And on August 18, Arthur and Miriam Canter stepped foot in the new Rare Book Room which now bears their names.

On August 22nd, the Rita Benton Library welcomed its first patrons to the new library.

Voice students from School of Music and the Chamber Singers of Iowa City performed three recitals as part of “Noon Tunes” during the Main Library Gallery exhibition “First Folio: the book that gave us Shakespeare.” Songs featuring texts by the Bard are plentiful, and attendees were treated to old favorites as well as contemporary settings.

September was also when the School of Music Recording Archive (1971-present), which includes reel-to-reel tapes, DATs, cassettes, and CDs, moved from the old recording studio on Riverside to the Music Library. The collection will be inventoried and the long-term goal is to digitally preserve this archive for access by this and future generations. Select recordings from 2008-2016 are already available to stream, with a HawkID and password, via the Iowa Digital Library.

The Grand Open House and Ribbon Cutting for the Voxman Music Building took place on October 21st.
The Music Library created a popup exhibit of items drawn from the history of the School, displayed information about the people for whom rooms are named in the Library, and had a steady stream of visitors throughout the afternoon and into the evening.

October was also the month where we experienced some of the growing pains of being in a new building. During a significant temperature change, condensation started to drip from heating and cooling units above the stacks. Double bass professor Volkan Orhon reported moisture in the stacks, and the library staff hustled to respond, including members of the Libraries’ excellent Preservation and Conservation departments. No scores or books were damaged.

A key piece of equipment was added to the Music Library this Fall: a high speed, heavy duty scanner. It is highly used and popular with faculty, students, and members of the public. The Music Library is thankful to the Coke fund, which funded the purchase of the scanner. 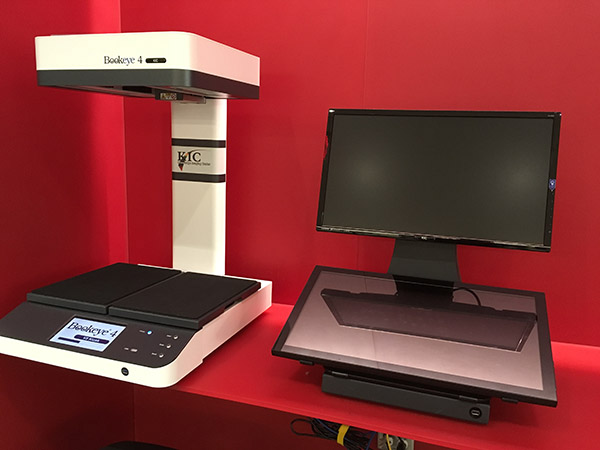 Currently, the Music Library is gearing up for 2017. Plans for the coming year include several efforts to preserve and digitize portions of the School of Music’s many archives, completion of a finding aid for the Frederick Crane Papers (marvelous resource for musical history in Iowa, study of the Jew’s Harp, musical instrument iconography, and more), partnering with Dr. Wilson Kimber and her class on Music and Cultures of Print in the Eighteenth Century (which will draw upon many items held in the Canter Rare Book Room, and hosting the Midwest Music Library Association annual meeting in October.

We hope you will visit the Rita Benton Music Library, use its collections, draw upon the expertise of its staff, and enjoy our beautiful new facility in the Voxman Music Building.