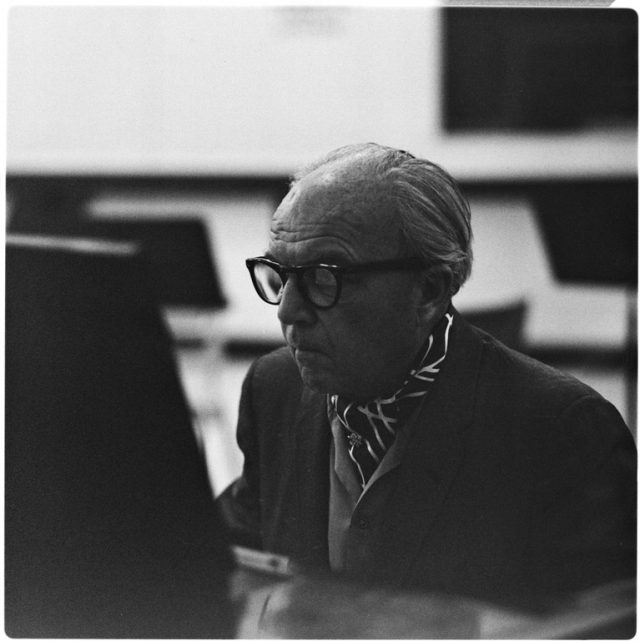 Can works composed in the United States be considered American if they draw on European styles? When does an immigrant – and his art – become American?

The November 17, 1965 University Orchestra program offers one opportunity to consider how these questions can be navigated. The program notes for his Symphonic Elegy, In memoriam: Anton Webern (1946) present Austrian-born Czech Ernst Krenek (1900-1991) as an American composer.1 His American citizenship is emphasized, noting that the piece was written in St. Paul, MN, nine years after Krenek’s emigration. However, William Pepper, the program notes’ author, unifies the four pieces of this program by appealing to European dynasties of composers. Pepper notes that while Mozart and Beethoveen are considered members of the First Viennese School, Webern was part of founding the Second. As Webern’s student, Krenek was a direct descendant of the Second Viennese School.2 By framing the program in this way, Pepper emphasizes the way that programming at the University of Iowa during the late sixties involved experimentalists without straying too far from canonical giants.

Krenek’s association with the European tradition of art music give his music prestige, but he is still claimed as an American composer. Here, his Americanness is legitimized by subtly emphasizing his flight from oppression in Nazi Germany.3 Pepper notes that Webern was killed in Germany when he exited his house after curfew, further emphasizing the political priorities that loomed large in the American mind of the 1960s. These program notes seek to establish Krenek’s piece as both the product of American freedom and the heir of the great Viennese masters.

Correspondence between Krenek and Himie Voxman about scheduling a trip to campus is held in the Rita Benton Music Library Special Collections, but there is no evidence yet whether Krenek was able to visit.4 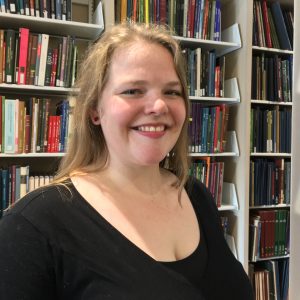 Lisa Pollock Mumme will finish her M.A in Musicology at the University of Iowa in Spring 2019. Lisa studies gender and music, specifically in film music, with a secondary interest in the performing bodies of nineteenth-century Latin American opera world. Lisa’s work in film music focuses on gender in genre film, with particular attention to dystopian works. Lisa’s thesis on the Mad Max franchise located a site of embodied resistance for one disempowered character in her diegetic performance of her own theme, and defined competing musical forces that simultaneously masculinize and feminize subsequent characters. Her secondary area of research concerns the nineteenth-century Mexican opera singer and composer Ángela Peralta. Lisa plans to develop both facets of her research as a PhD student next year.