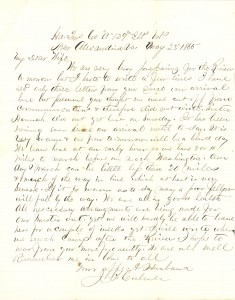 We are very busy preparing for the Review to-morrow, but I haste to write a few lines.1 I have recd. only three letters from you since our arrival here, but presume you thought we were cut off from communications & therefore did not write.

Sister Hannah did not get here on Sunday [the 21st]. It has been raining ever since our arrival until to-day. It is very warm, & we fear to-morrow will be a hard day. We leave here at an early hour as we have 8 or 10 miles to march before we reach Washington. Our day’s march can be little less than 20 miles, & much of the way in line which at best is very Severe.2 If it is warm as today, many a poor fellow will fall by the way.

We are all in good health. All necessary arrangements are being made for our muster out, yet we will hardly be able to leave here for a couple of weeks yet. I will write when we reach camp after the Review. I hope to hear from you more frequently. We are all well. Remember me in love to all.