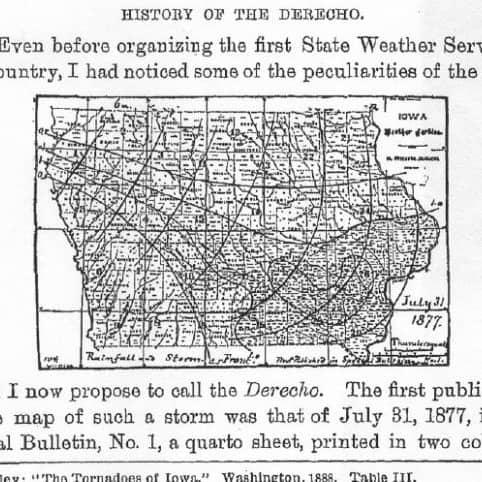 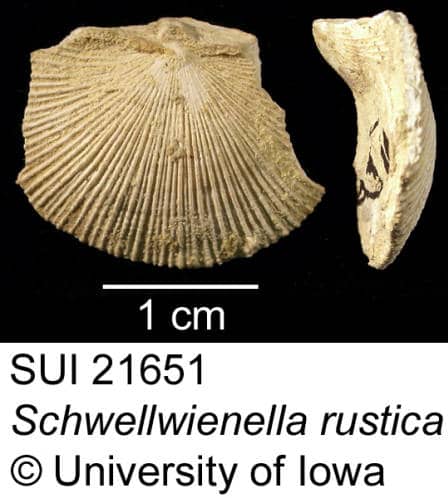 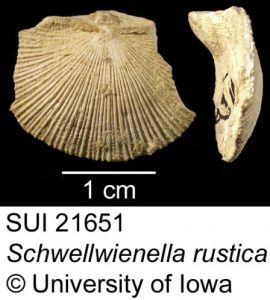 It’s amazing, isn’t it, to think that we in the 21st century can pick up a rock from a quarry, a roadside embankment, or perhaps even your own driveway that retains the shape and detail of a creature that has not been seen on the face of the earth for hundreds of millions of years? Fossils are essentially past lives cast in stone that give us a window into life from another time, another world.

When Robert Wolf of Fort Dodge, Iowa was handed the first fossil that he’d ever seen, a brachiopod, by a friend in the 4th grade he surely must have experienced a sense of amazement over the rock that appeared as if it once lived. If so, that sense quickly gave way to fascination, a fascination that led him to a lifetime of fossil collecting, and also led him to author Fossils of Iowa: Field Guide to Paleozoic Deposits. Recently he turned over his collection of over 18,000 fossil specimens to the University of Iowa Paleontology Repository.

The UI Paleontology Repository is an educational and research collection based in Trowbridge Hall on the University of Iowa campus, consisting of over one million fossil specimens collected from around the world that includes both animal and plant species from all geological ages, though the vast majority are Paleozoic marine invertebrates. The collection of fossils in the Repository dates back to 1855 when it was part of what was then known as the UI Cabinet of Natural History.

Despite the size of the Repository collection, only about 14% of the collection is currently cataloged, which limits access for research purposes. As a result, Tiffany Adrain, who became the Repository Collections Manager in 2003, has worked to secure grant funding to make collection data more accessible through searchable online databases, such as the Paleontology Portal, increasing both the profile and value of the holdings of the UI collection. Also, by participating in consortial projects, such as iDigBio, it will be possible over time to leverage networked specimen data — think “big data” –to realize the full research potential of the UI’s collection, in conjunction with the collections of other US institutions.

Fortunately, Robert Wolf kept detailed records on the specimens he collected. Without the detailed documentation that accompanied the specimens he collected, it’s quite likely that the Repository would not have accepted his donation. Without such documentation, a specimen remains a merely interesting or beautiful artifact. For the contextual details of a fossil’s origin are what help scientists make correlations with other data to build a fuller picture of the life of extinct species and the world they lived in long before humans came on the scene.

Although citizen science these days is often associated with crowd sourced contributions for large, centrally coordinated projects, Robert Wolf’s lifelong efforts as a self-taught scientist culminating in a donation to an ongoing collection demonstrates another pathway to citizen science, one no less valuable.

If you’d like to learn more about fossils in Iowa, and paleontology more generally, you can

“Do you know how the city of Coralville got its name?”

Featured Books from the Sciences Library

Bringing Fossils to Life : an Introduction to Paleobiology by Donald R. Prothero

Iowa’s Geological Past : Three Billion Years Of Earth History by Wayne I. Anderson

A Sea Without Fish : Life In The Ordovician Sea Of The Cincinnati Region by David L. Meyer and Richard Arnold Davis

The Story Of Life In 25 Fossils : Tales Of Intrepid Fossil Hunters And The Wonders Of Evolution by  Donald R. Prothero

Fossils and Rocks of Eastern Iowa: A Half-billion Years of Iowa History by J. N. Rose

“The town was christened Coralville in 1866 shortly after Louis Agassiz, a Harvard zoologist, spoke at the University of Iowa about the “Coral Reefs of Iowa City” and was impressed by the samples of fossilized coral that he found in the limestone around the mills along the Iowa River.” (From Coralville’s official website)

Much appreciation to Kai Weatherman for uncovering the story on Iowa’s fossils and authoring this post!