Discovering lost pieces of music in dusty archives is what most people think musicologists do. We only make the news if someone finds an unknown manuscript by a famous composer buried in a library. It’s true that the most rewarding part of my job is getting to hold centuries-old letters, scores, and concert programs in my hands and to imagine their earlier lives. But “dusty archives”? No, thanks to the Rita Benton Music Library’s digitization of rare scores, I made my biggest discovery on the internet: a volume of sonatas that may have belonged to the family of the novelist Jane Austen.

This story starts a few years back when George McTyre, a doctoral voice student, took me out for coffee. He had one more music history requirement, and he wanted me to offer an interesting class. By the time I’d finished my cappuccino, I’d agreed to teach “Music in the World of Jane Austen.” Designing the course was not exactly a challenge for me. I confess that I’m a “Janeite”—I’ve read all of Austen’s novels multiple times, have seen the movie adaptations, and own a plastic Austen action figure. I even have the voice of Mr. Darcy greeting callers on my cell phone. 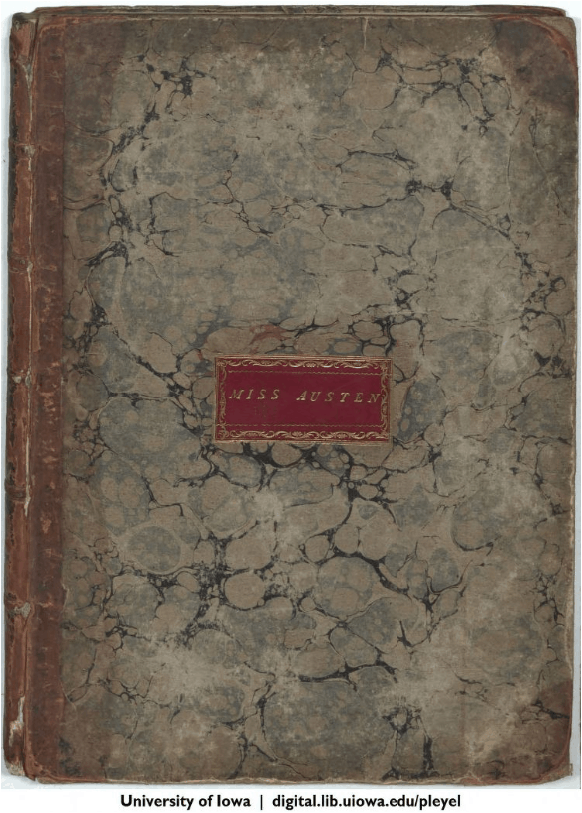 In addition to being a writer, Austen was an amateur pianist who practiced every morning before breakfast. The music manuscripts she copied by hand survive, as do many published pieces that belonged to her and to other women in her family circle. These compositions became my class’s “textbook,” as students learned about music making in England during Austen’s lifetime. The Rita Benton Music Library owns many eighteenth-century scores similar to those the writer might have played. When we moved into the Voxman Music Building in 2016, I decided to offer a class based entirely on rare materials in the Library’s Arthur and Miriam Canter Rare Book Room. Featured prominently would be the extensive collection of historic scores by composer Ignaz Pleyel (1757-1831). The compositions of Pleyel, a contemporary of Franz Joseph Haydn, were popular throughout Europe. Rita Benton was the leading scholar of his music, and the Music Library’s Pleyel collection is unparalleled.

Late one night I was perusing the virtual Pleyel scores available online through the Iowa Digital Library. I found a set of six sonatas bound in a volume labeled “Miss Austen.” I emailed librarian Katie Buehner and joked about my “discovery.” But then I looked more closely. Iowa’s sonatas have penciled-in fingerings that resemble the fingerings in another copy of Pleyel’s sonatas, this one owned by Jane Austen’s sister-in-law, Elizabeth Knight. Here things get a little complicated. Elizabeth was the wife of Edward Austen. Edward had been adopted by the wealthy Knights, and he later changed his own family’s name when he received his inheritance. Thus his wife was “Mrs. Austen” or “Mrs. Knight,” never “Miss Austen,” so it’s not clear that Iowa’s Pleyel sonatas could have belonged to her. Another possible owner of the sonatas is Elizabeth’s daughter, Fanny Austen, Jane’s favorite niece, who played the piano very well. Of course, one cannot help but wonder if the volume ever found its way to Jane’s sister, Miss Cassandra Austen or to Jane herself.

I’ve explored the possibilities for the provenance of Iowa’s Pleyel Sonatas in an article for Fontes artis musicae, the journal of the International Association of Music Libraries. I wish I could say I have positive proof that an Austen performed from this particular score. Unfortunately, the complete origins of the “Miss Austen” volume remain a mystery. Still, we can imagine that while taking a break from working on Pride and Prejudice or Emma, Jane Austen enjoyed a rendition of a Pleyel Sonata performed by her talented niece or sat down at the pianoforte and played from the score herself. 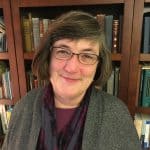 Marian Wilson Kimber is Professor of Musicology in the School of Music. She has published numerous articles about Felix Mendelssohn, Fanny Mendelssohn Hensel and spoken recitation in concert life. Her book, The Elocutionists: Women, Music, and the Spoken Word (University of Illinois Press, 2017) won the H. Earle Johnson Subvention from the Society for American Music. Wilson Kimber is a founding member of the duo, Red Vespa, which performs comic spoken word pieces by women composers.