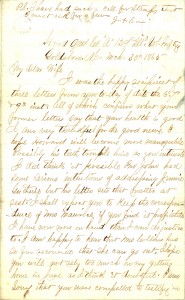 I was the happy recipient of three letters from you to-day, of date of 6th, 7th & 9th inst., all of which confirm what your former letters say that your health is good. I am very thankful for the good news. I hope Howard will become more manageable, possibly his teeth trouble him as you intimate.

I did think it possible Bro. John [Murphy] had some serious intentions of addressing Jennie Gutherie, but his letter sets that matter at rest.1 I shall expect you to keep the correspondence of Mrs. Maurice if you find it profitable. I have now more on hand than I can do justice to. I am happy to hear that Mrs. Collins has so far recovered that she can go out. I hope you will not rely too much on my getting home in June, as I think it doubtful.

I am sorry that you were compelled to testify in that horse suit. I would much rather pay for her myself. As it is probable Bro. Utley lost the suit, do you try & find out quietly what he values the mare at, and I will pay for her as soon as I can.2 I am surprised at Mathis’ conduct and will write to W. B. Lyon about it. Do not settle it again. I have an acct. at Lyon’s of things I brought for the boys & forgot to set down the amount.3 If you have an opportunity, I wish you would please get it for me, & I will send the amt. when we are paid. We expect pay in a few days.

Send for the bolt of muslin if you have sufficient funds to spare. I wrote in one of my letters a request for you to keep an account of the time you stay at Utleys with the time I spent there. Possibly that letter may not have reached you.4

The band of the 2d Brigade has been playing for an hour some very sweet airs. They were playing “Home Sweet Home” when I sat down to write; they have just ceased. We have a great deal of good music as there are six bands within a few hundred yards of us. We are quite well fortified here, but I have not heard of any enemy in our immediate front for several days.5 There was a rumor in camp to-day that Grant has taken Richmond at a loss of 25,000 men, but it lacks confirmation.6 The Rail Road is opened up with Wilmington, & trains arrive and depart regularly to & from both Wilmington & Morehead City.7

We recd letters to-day from Pontiac as late as the 20th March which is only 10 days. The men begin to count the days now for the 8th Sept. to come round.8 They talk a great deal about home & the prospects there.

Christ. [Yetter] went on duty (picket) in my place this morning to give me an opportunity to complete the muster rolls. It rained so much this forenoon, however, that I did not get through. Nate [Hill] is out visiting & has not come in yet.

You asked me in one of your letters what I used to cure the Inflamatory Rheumatism. I used nothing but cold water in the shape of baths three or four times a day at first — decreasing in number gradually. It is a never failing cure. I had the water poured from a water pot in a stream of 1/2 inch in size upon the affected parts, gradually increasing the height to 10 or 15 feet. It will certainly scatter the swelling & drive away the pain. I hope Bro. Harrington will try it & keep it up all summer.9 Harry McDowell spent an hour here early in the evening. He is very anxious for the expiration of his term of service so that he may enjoy the pleasures of home with a wife; he is devoted as ever. Jim Morrow & I had quite a chat last night; he had a great many questions to ask about his lady friends in Pontiac. Nate is just coming home, he has spent the evening with Charlie Peck.10 Charlie is acting Commissary of the Regt. John Wilson has not yet returned.11 Weiser (the bugler) has just heard of the death of his wife.12 She has been sick for several months; but, as he had no opportunity to hear from her, he did not learn that she was sick until the mail reached him here. She leaves 3 small children.

Saml. McGooden is not with the Army. He went home from Atlanta to have an operation performed on his eyes, & they have not heard from him since. I saw [William] McCartney yesterday, he is well & has stood the march very well.

There is a band about a quarter of a mile off, & the music comes this way carried by the breeze. It sounds so very sweet that it reminds me of those times at home when we could hear the band in the court yard. “When shall we meet again?” I like the song very much but hardly think it conducive to happiness to dwell on it too often. God, who has thus far shown us only love and mercy, will perform all his promises in His own good time. I stood out in front of my tent awhile to-night watching the stars & listening to the music & found myself at home directly. So for fear of the blues, I hastened into my tent & commenced writing.

There is quite a circle of the boys around the fire talking of their marches through Georgia & South Carolina. I can only be a listener & have but a faint idea of all their exploits as they take occasion to tell me many times each day.

I had a long letter from Saul yesterday.13 He says if this campaign does not end the war, he is coming into the service and California will put forth her strength.

The “Sentinel” has not reached the Company since I left. I spoke to Decker about it when I was home, & he promised to see to it.14 If you have an opportunity, please remind him of it. Send me the No. containing my Charleston letter. I have not had time to write to him or the paper since my arrival here. It is 20 minutes of ten, & I must close if I would write any other letters to-night. I hope Our Father will still preserve you in good health & make you happy. Remember me kindly to all. Kiss Howard for me. Tell our Friends to write. Accept much love, Good Night.

Outreach and Instruction Librarian. Lover of coffee, as well as 19th century photography, painting, tourism and print.
View all posts by Colleen Theisen →
This entry was posted in 1865, March. Bookmark the permalink.