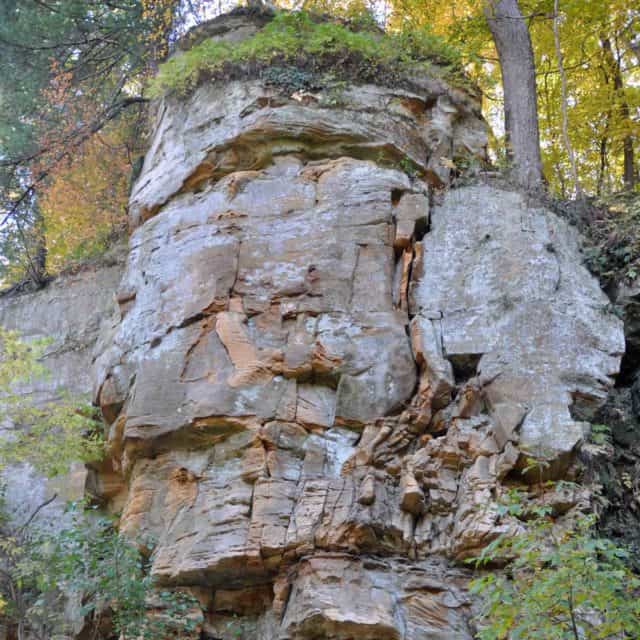 Iowa is not known for having an especially dramatic landscape. But in fact there are many hidden gems to be found in this particular plot of so-called flyover country. Among them is Wildcat Den State Park in southeastern Iowa. According to Iowa DNR it is one of the most photographed state parks in Iowa. If you’ve not yet visited this state park to walk its trails and view its remarkable geological features, take advantage of any opportunity to do so before it becomes snow and ice encrusted. The park is 12 miles northeast of the city of Muscatine; from the University of Iowa campus it’s roughly an hour drive by car.

The most prominent landscape feature at Wildcat Den are the spectacular sandstone cliffs and glens whose origins date back to the Middle Pennsylvanian period, or about 310 million years ago, when ancient rivers coursed through this landscape. What makes these cliffs on the south side of the park so visually arresting is due in part to cross-bedding*, as well as iron-oxide stained and cemented zones visible on the exposed sandstone. To walk the trail at the base of these cliffs is every bit as captivating as a visit to a fine arts museum. But there’s much more to the geology at Wildcat Den.

Brian Witzke’s 1999 article in of Iowa Geology (pages 16-19 ) provides a brief, but very informative introduction to the geology of this park, while “The Natural History of Wildcat Den State Park,“ is a more detailed introduction to all aspects of the park, including its history, archaeology, vegetation, and wildlife. Its treatment of the park’s geology is in-depth and somewhat technical, but would still be informative to the novice. In this Geological Society of Iowa (GSI) field trip guidebook Robert McKay details the geological phenomena of cross-bedding* that is so visible in the sandstone at Wildcat Den. It also includes discussions of all the stops on the 1997 GSI field trip, and could serve as either a preview of what to expect on a visit or a review to answer questions raised after first visiting the park.

Two books published by the University of Iowa Press in its Bur Oak series would make excellent companion resources to help contextualize the geology of not only Wildcat Den State Park, but of geology all across the state: Jean Prior’s Landforms of Iowa and Wayne Anderson’s Iowa’s Geological Past: Three Billion Years of Earth History. Both Prior and Anderson note the preponderance of sedimentary rock throughout Iowa in its exposed rock record, evidence of its early marine environment.

Iowa Geology, a small journal published by Iowa DNR Geological Survey Bureau from 1976 to 2001, offers a treasure trove of highly readable articles for a general audience on a variety of topics pertaining to Iowa geology one might imagine, including “The Midcontinent Rift,” “Global Climate Change and the Cretaceous Greenhouse World,” and “The Age of Dinosaurs.” All issues are available in PDF format from Iowa Research Online: The University of Iowa’s Institutional Repository.

For those who wish to explore Iowa’s geology in other parts of the state, the Iowa Geological Survey (IGS) provides a beautiful suite of webpages called Parks of Iowa, which also makes available guidebooks similar to “The Natural History of Wildcat Den State Park” for 12 other Iowa state parks. In fact, IGS makes the Geological Society of Iowa Guidebooks for field trips to over 70 diverse sites throughout Iowa freely available from its publications platform.

Thank you to Kai Weatherman for writing this post, and a special thanks goes to Raymond Anderson for his expert geologic commentary!

Photographs by Kai Weatherman with Text by Raymond R. Anderson

The best-exposed rocks in Wildcat Den State Park are Pennsylvanian-age sandstones, originally deposited in a large river that was flowing to the southwest through the area.  The river was flowing through dense equatorial forests towards an arm of the sea that was advancing from the south into Iowa about 312 million years ago.  The sand formed sand bars and underwater dunes that were constantly being modified as river channels changed directions, eroding and cutting into existing bars and covering them with new sand layers (beds) from different directions creating the spectacular cross-bedding that is displayed in most exposures.  Geologists identify these sandstones as the Spoon Formation of the Cherokee Group.  At some exposures, especially at the Devil’s Punchbowl, the sandstones are resting on a dark gray shale unit, the Caseyville Formation, the oldest Pennsylvanian unit in Iowa.  The Caseyville was deposited on a river delta that developed into an earlier advance of the Pennsylvanian sea into Iowa.

Many of the photographs on this page were taken during the 2000’s. So, some features may appear somewhat different now.