Facebook, Twitter, Instagram, YouTube… The options for sharing your life online seem to be endless. But in this age of social media, maintaining privacy is increasingly challenging. Join Kelly McElroy, Undergraduate Services Librarian, and Sara Scheib, Sciences Research & Instruction Librarian for a discussion of privacy in the social media age. Share your strategies for managing privacy online and learn from others in this informal and open workshop.

This workshop is free and open to all UI students, faculty and staff. There is no need to register. You may bring your lunch if desired. Free coffee will be provided. If you have any questions, please contact Sara Scheib at sara-scheib@uiowa.edu or (319) 335-3024.

Several library applications will be unavailable for 2-3 hours on Saturday morning at 7:00am while Windows updates are installed on our servers.

The services impacted will be: SmartSearch, InfoLink and the Iowa Digital Library.

Please contact the Sciences Library if you have any questions or concerns.

Are you overwhelmed with sources and citations for your research project? Please join Sciences Research and Instruction Librarian, Sara Scheib, to learn how to evaluate the credibility of sources and manage your citations using web-based tools.

In this workshop you will learn:

The workshop is open to all UI students, faculty and staff. There is no need to register. You may bring your lunch if desired. If you have any questions, please contact Sara Scheib at (319) 335-3024 or sara-scheib@uiowa.edu.

Please contact the Sciences Library at (319) 335-3083 or lib-sciences@uiowa.edu if you have any questions.

Due to popular demand, the Sciences Library will be offering three workshops on Citation Management Tools, next week in W238 CB. Sessions will be held on:

RefWorks will be the main focus of these sessions, since all UI students, faculty and staff are eligible for a free account, but questions regarding other tools such as EndNote, Zotero, Mendeley, etc. will be addressed. At this workshop you will learn:

If you are unable to attend one of these sessions, you are welcome to stop by E258 CB during the Librarian Office Hours (Tuesdays 11 AM – 1 PM; Wednesdays 11:30 AM – 1:30 PM; and Thursdays 10:30 AM – 12:30 PM) for individual or small group instruction on this topic and others. You can also meet with Sara Scheib one-on-one, or stop by the Sciences Library, at your convenience.

Please contact Sara Scheib if you have any questions.

Washington D.C – Science agencies across the U.S. federal government announced today the launch of the Spanish version of Science.gov, http://ciencia.science.gov. Ciencia.Science.gov provides the same breadth and depth in science search as does Science.gov, covering over 200 million pages of authoritative U.S. government science information including research and development results from 17 organizations within 13 federal science agencies. Free access is provided to over 55 scientific databases and more than 2,100 selected scientific web sites. Integrating Microsoft’s Translator, Spanish-language queries to Ciencia.Science.gov initiate searches of U.S. databases and web sites with results appearing in Spanish. This represents an innovative use of existing commercial technology to broaden public access to federal science information.

“Congratulations to all the federal science agencies involved in Science.gov for making the best government science data accessible to the millions of Spanish-speaking Americans across our country,” said Secretary of the Interior Ken Salazar.  “I encourage students, teachers, researchers, engineers and members of the public to take advantage of the new Spanish version of this valuable federal science portal.  The Ciencia.Science.gov web site will help increase the vital role of U.S. scientific information in education, innovation and discovery, and will help encourage Latino communities to promote careers in the fields of science, technology, engineering and mathematics.”

In addition to offering expanded access to the Spanish-speaking public, Science.gov now includes new multimedia content and additional features to help users find the science information they need. For the first time, R&D video is available from the Department of Energy (DOE), MedlinePLUS (NIH), the National Aeronautics and Space Administration, (NASA) and the National Science Foundation (NSF). Images from the Library of Congress have been added to the image search that is now integrated under a new multimedia tab on the results page. Search enhancements include visual representations of topical information in an easy-to-use touch and dial format.

The Science.gov Alliance will highlight these and other achievements in its 10th Anniversary celebration in December.

“The Alliance has worked hard to make this a significant interface update and the new navigation will help the public find the science information they need,” said Tina Gheen of the Library of Congress, and Science.gov Alliance chair. Annie Simpson of the U.S. Geological Survey, and Science.gov Alliance co-chair, said, “This federal interagency information portal, now 10 years strong, continues to improve public access to federal science information products.”

The interagency Science.gov Alliance – which governs Science.gov – includes the Departments of Agriculture, Commerce, Defense, Energy, Health and Human Services, Homeland Security, the Interior, and Transportation; the Environmental Protection Agency, the Library of Congress, the National Aeronautics and Space Administration, the National Archives and Records Administration, and the National Science Foundation. These agencies represent 97 percent of the federal R&D budget.

Science.gov, your gateway to U.S. federal science, is supported by CENDI (http://www.cendi.gov), an interagency working group of senior scientific and technical information managers.

SciFinder has released a new update to help scientists increase their productivity by improving “precision and evaluation of reaction answer sets, and…collaboration with other SciFinder users.”

Please join the Sciences Library for:

You may bring your lunch. Coffee and cookies will be provided.

In this workshop, you will learn: 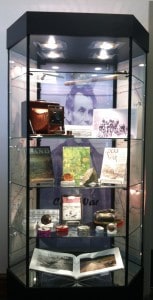 The Sciences Library has a new exhibit on display for September: the Science of the Civil War.

The exhibit features books from the UI Libraries collection and some great Civil War era artifacts, including:

The library would like to thank the Geoscience Department and Vera Jean Fitzgerald for loaning us these items.