Holly Hibner’s tweet about John Blyberg‘s talk at the recent Computers in Libraries (#CIL2010) was one of the mostly highly retweeted posts of the conference. Blyberg’s metaphor captures the thought that I’ve had swimming around in my head for long — What’s the use of making an elegant, user-friendly library web site when the centerpiece of the whole library info-ecosystem — the catalog — is hopelessly difficult to navigate? I blogged about this in October when I found a great graphic (part of which is below left) that points to the striking contrast between the simple, inviting user interfaces of dotcoms like Google and Apple, and the much more complicated interfaces of libraries.

With the small screen of mobile devices the trimmed-down, mobilized library website makes the old, non-mobilized library catalog seem even more ghetto-like, using Blyberg’s phrase, so that it’s questionable to even link to the catalog from the mobile library site. With the constraints of mobile design, we have no choice but to take up the opportunity and simplify. Several libraries have now mobilized their catalogs, among them the clean, simple design from UNC below. Scroll down for links to a series of articles I’ve written on mobile design and libraries. 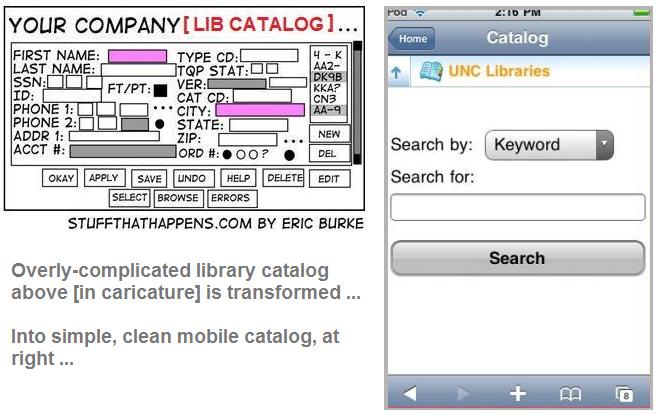 Flickr set has graphic above & the full version in other article, that shows the context of the library catalog caricature.

Articles on mobile design and libraries:

hhibner: Your web site is great, but when people click on the catalog link, “Boom! They’re in the ghetto!” John Blyberg #cil2010