In December 2006, Luke Wroblewski blogged a good discussion about The Complexity of Simplicity in user-interface design. Interestingly (in light of his recent articles discussed below), in the 2006 article he doesn’t mention MOBILE design. What makes this especially interesting is that the iPhone, with its game-changing elegant mobile interface, exploded on the scene just a month after Wroblewski’s article, in Jan, 2007. So … Jump forward to an excerpt from Wroblewski’s Nov 2009 article Mobile First, in which he first proposed the idea that all web pages should be designed first for a small screen, before considering their appearance on a large screen:

Mobile forces you to focus – Mobile devices require software development teams to focus on only the most important data and actions in an application. There simply isn’t room in a 320 by 480 pixel screen for extraneous, unnecessary elements. You have to prioritize. So when a team designs mobile first, the end result is an experience focused on the key tasks users want to accomplish without the extraneous detours and general interface debris that litter today’s desktop-accessed Web sites. 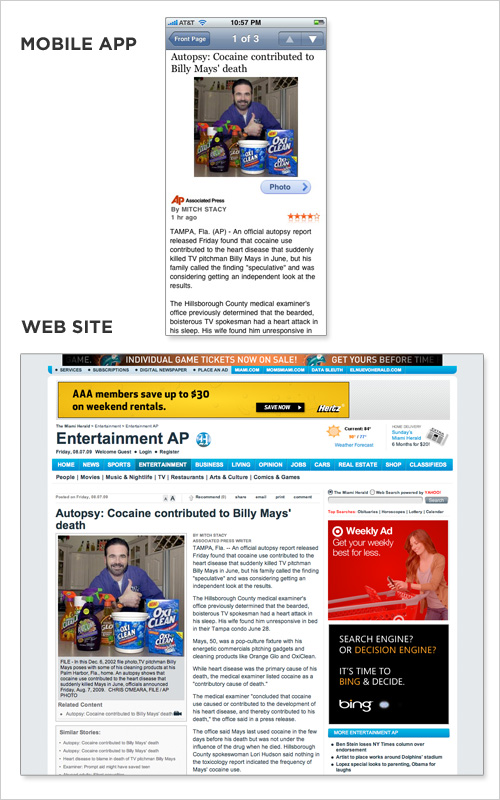 The link in the quote above goes to Wroblewski’s Aug 2009 article Mobile App User Experience, which has the image at left, a great “picture-is-worth-a-thousand-words” view of the words in the quote — Cut the crap and give the user the important part, what they’re looking for! Taken together, I think, the quote and the picture tell the story of what’s been happening in the world of interface design since the introduction of the iPhone –Though I’m sure this is something of an oversimplification, I think that the simple user interface that seemed so hard to attain on a large screen has now become easier with the forced constraint of the small screen.

Wroblewski’s ideas resonate with what I’ve been writing about simple mobile design for library sites. Although he’s not talking specifically about libraries, his ideas are certainly right on-target for us in libraries. The AP News example he chooses for the picture especially catches my attention, as I’ve been watching news sites to see how they’re adjusting to the mobile upheaval — I think they carry lessons for libraries, as we go through the same thing.

Note in the picture here that we in libraries have an advantage over news sources and other dotcom sites — We don’t have the extra baggage of advertising — This in itself would seem to make mobile friendly design a Great Opportunity for Libraries. The obstacle for libraries seems to be the longstanding culture of overly complicated design for our resources, especially OPACs. The good news here is that with mobile design there really is no alternative to simple design — As Wroblewski says, the size of the screen just doesn’t allow extra fluff. The constraints of mobile design, I think, level the field — This makes it easier for us in libraries to create sites as simple and easy to use as the big dotcoms. As I’ve written, there are encouraging signs that we’re doing this.

I better wrap this article up — It’s turning into a classic case of controlled serendipity … Just as I thought I was about finished, the “less is more” thought came into my mind, as a pithy epigram of mobile user design. Alas, I Googled, and found this, another striking quote, from Darja Isaksson (www.inuse.se), maybe I’ll expand more later, but for now, a good way to end:

So … Does the iPhone live up to its hype? [article title] … boldface added by me …
The results? Stunning. The iPhone has introduced a new interaction paradigm to the world, in an uncompromising way that proves that “less is more” when it comes to true user experience.